So, my totally uncompetitive year list has begun with a walk down Old Coach Road under the steely grey, Bilborough sky.

First off, a few basics take the list off zero, as Magpie and Great Tit are seen along the forlorn hedgerow adjacent to the Old Park Farm allotments.  I say hedgerow, although the once healthy thicket has now been reduced to the odd Elder and a razor wire fence.

Nailing Robin, Blue Tit, Song Thrush and similar megas, I arrive in Wollaton, where the single Redwing that I discovered on Boxing Day is still picking at the Hupeh Rowan on Lambourne Drive, along with a Mistle Thrush and two Blackbirds.

Across the road at Raleigh Pond I soon add three Goosanders and a Shoveler (scarce here) plus the local Nuthatch and Treecreeper are in full song.  Continuing to Martin's Pond (I'll get a Little Crake there one day!) I quickly add Black-headed Gull, Great Crested Grebe, Mallard and Tufted Duck.  In the bushes are Long-tailed Tit, Bullfinch, Great Spotted Woodpecker, Goldfinch and Siskin.  Not a bad start to say I'm only 500 metres from my house but with a dinner to cook it's back home for a coffee and a well-earned mince pie.

On the way back, I pull in four of the five basic gull species.  Cooking on gas! 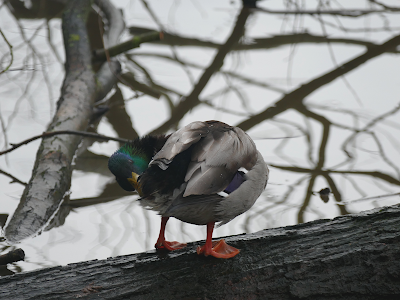 A drake Mallard at Martin's Pond