On 14th October I embarked on my seventh trip to the island of Texel in the north west of the Netherlands, having sailed from Harwich the previous evening from the ironically named Harwich International.  The port, which has almost no amenities had now suffered the loss of the gangway, meaning the handful of foot passengers had to be transported to the ship by a clapped out bus.  Since 2014 the terminal only supports the ferry to Holland, since the Danish carrier DFDS had been forced to withdraw its out-dated ferry for commercial reasons.  After the withdrawal of the Newcastle-Bergen service in 2009, there is now no passenger service to Scandinavia from the UK.

I arrived on Texel on the mid-day ferry, full of excitement, after a week of high pressure and easterly winds promising much.  However, given the vast amounts of cover on the island, it's inevitable that a lot of good birds must get over-looked, yet the island still draws a lot of birders from everywhere in Holland, especially in the autumn when Dutch Birding organize their Birding Weekend, which this year ran from 16th - 18th October.

Overnight, the weather had turned more inclement with clouds and some rain resulting in a massive fall of migrants onto the island.  I had experienced some good birding on Texel before, but the sheer number of birds present in the following few days was exhilarating.

After dropping off my rucksack at my guest house, I set off to explore the woods and scrub around de Krimbos and Sluftervallei campsite.  It was immediately apparent that something quite extraordinary was happening with common migrants everywhere .   A twitter message I had read earlier, which said ‘Norway is now empty’ was beginning to make sense.  There appeared to be at least one Goldcrest or Robin in every bush, tree and tussock - trust me this is scarcely an exaggeration.  Redwings were breezing through the trees in tremendous numbers – there were just thousands of birds around, with smaller numbers of Chiffchaffs, Bramblings and Siskins adding to the mix, as well as a handful of Wheatears and one late House Martin.  With so many birds moving through, my hopes of something really good in the following days were high.

The next morning began fine, with cloud thickening during the day and there had been no change in the number of migrants about, which made birding exciting and rewarding.  I headed for the north cape and the lighthouse, seeing a Rough-legged Buzzard briefly, en route.  After adding Blackcap to the week list, I was soon watching a Great Grey Shrike after being tipped off by my friend Jonathan, who helpfully fed me news as and when it broke.  Being literally a minute’s walk from the bird was mere luck.  Any number of Goldcrests were living very dangerously in the shrike's vicinity, and the bird would have a very nice menu with such an abundance of the tiny passerines to feast on. 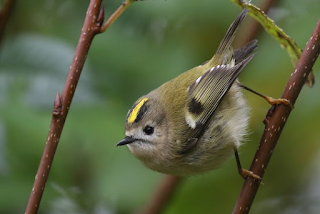 After a tip off from Erik Mengveld, I headed to the beach north west of the lighthouse, in the company of Norbert van de Grint, where we were able to get wonderful views of two Arctic Skuas loafing on the beach.  The birds were relatively unconcerned with their small audience and it was a rare opportunity to observe these birds on the ground at this time of the year. 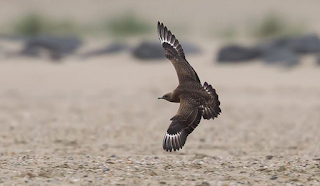 After enjoying this spectacle we headed through dunes, observing a female Merlin overhead and then connecting with a nice Yellow-browed Warbler in de Tuintjes – a small scrubby area of willow and sycamore, which is a magnet for good birds.  I spent the afternoon birding alone and rounded off the day checking the low tide at de Cocksdorp, where I had two Spotted Redshanks and a Greenshank among the hundreds of Dunlin and Curlew and thousands of Oystercatcher and Common Redshank.

The Friday was dull weather-wise but adrenaline was pumping as news that a Red-necked Phalarope, found late the previous day was still present at a pool just north of den Hoorn.  Luckily, my host Ger Monterey needed to do the weekly shop at den Burgh and was pleased to drop me off and pick me up.  The bird began right at the back of the pool at Grote Vlak but eventually flew obligingly close, pirouetting furiously around a party of Shoveler and giving fantastic views in the scope.

I worked the north end of the island in the afternoon, seeing two Bearded Tits, one Ring Ouzel and a Water Rail feeding in the open.  The winds were still veering between east and north east and if anything the number of common migrants had increased and I was almost falling over Robins, and Fieldfares were now pouring in too.  Just before packing in for the day, a walk around the trees to the west of the village provided a surprise in the form of a Northern Long-tailed Tit, with small flock of europaeus.  Remarkably five of these lovely birds were observed in the garden of Vincent Stork, the following day. 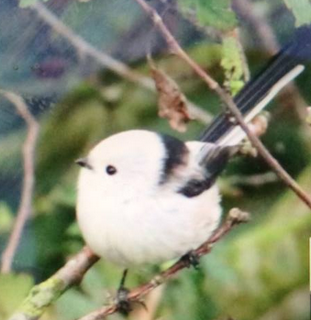 I met up with my good friends, Wietze and Jonathan Janse later and after a superb dinner of baked local Plaice we went to the Eirland House at de Cocksdorp where there was an interesting and informative talk on separating the various forms of Siberian Stonechat.  Although the majority of the lecture was in Dutch, it was remarkably self-explanatory, especially having mugged up on my Dutch topography and because so many names for birdy hues are the same or similar to English.

I joined Wietze and Jonathan on the Saturday, birding from the car down the east coast and then finding a Firecrest at Prins Henrik before news broke of a Black-throated Thrush at Loodsmanduin campsite.  However, despite hot wheeling it across the island, we were fifteen minutes too late and the bird had flown off with Redwing having showed itself to just 10 people or so.  Despite a thorough search by a couple of hundred birders the thrush was never relocated and a single Marsh Harrier was the only bird of note.  Somewhat deflated, we headed south to check the dunes south west of de Mokbaii.  Spirits were lifted, with the highlight a self-found Siberian Chiffchaff, as well as a single Great White Egret, a Peregrine, six Jack Snipe and two Ring Ouzels, all providing some consolation. 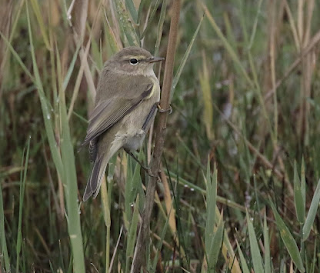 After a much needed cappuccino at de Robbenjager, we had a second Siberian Chiffchaff before we working the dunes and bushes around de Tuintjes.  we obtained fantastic views of a Rough-legged Buzzard and bagged another Ring Ouzel as we were careful not to step on the Robins that were flitting between our legs. 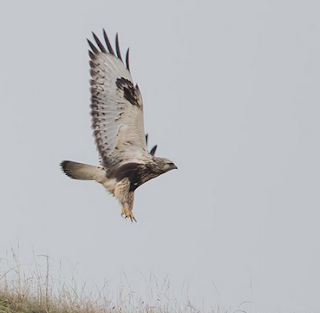 The Sunday was another wet day and we made the most of the poor light, birding from the car and opted to check the various car parks that are dotted down the west coast.  We had a few Wheatears at post 28 and then two Shore Lark at Westerslag near post 15, by the car park.

A random comment that I needed Barn Owl for my Dutch list was a most fortuitously timed remark, as we just a few hundred metres from a known roosting site and we popped in the barn briefly to see one huddled on its perch.  As the weather improved we found a Water Pipit in a flooded field near Oost and then did a detour to de Koog, where a Hooded Crow had been found.  After a bit of a run around we connected with the bird among a gathering of Carrion Crows.  Not uncommon forty years ago in the Netherlands, this is now a good bird to see and the third of four Dutch ticks for me that day. 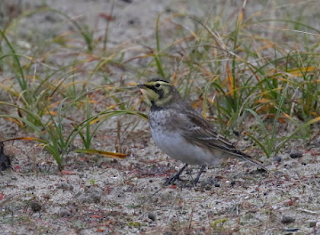 After the inevitable and welcome coffee and cake stop, we had a Short-eared Owl overhead at de Tuintjes, before Wietze called time on his weekend trip and I bade him and Jonathan farewell, opting to be dropped off at the lighthouse car park, just as a Woodcock flew past.   A yomp across the beach to the ‘Dam’ a breakwater formed by a row of rocks was rewarded by awesome views of two Purple Sandpipers, bathing and feeding among the Turnstones and Sanderling.  An adult Caspian Gull was also seen here, loafing and preening with the Herring Gulls. 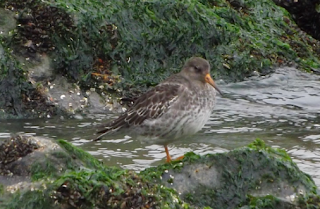 Being a solo birder again on the Monday, I opted for a sea watch at pole 28, as the winds had backed north north west.  I had nothing major, but boosted the trip list with a few Gannets, a nice raft of Common Scoter and five Red-throated Divers just off shore.   Working the dunes just south of here I had another Rough-legged Buzzard, initially on the ground and then in flight, plus a single Lapland Bunting overhead and a single Hen Harrier.  As I took a coffee break at Strandpaviljoen, and within the radius of the café Wi-Fi I checked the bird news on the app and found that I was just 20 minutes’ walk from an Olive-backed Pipit, which had been found in de Krimbos, the wooded area, just west of de Cocksdorp.  I paid the waitress and headed off as quickly as I could.  Looking at the app, my meagre Dutch told me the bird was nailed on and I joined a group of birders who had the bird on the ground right next to the cycle path.  The bird showed beautifully, its tail pumping, as it favoured the edge of the wood moving between bare branches and the short grass. 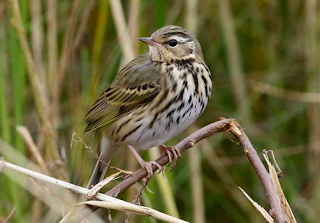 Satisfied with my views and happy to let those with better cameras get some mind-boggling photos I was alerted to a Pallas’s Leaf Warbler, which had been found in de Tuintjes.  I wasted no time walking the mile or so north and after a bit of a wait, got onto the Seven-striped Sprite.  The sun even came out and the assembled birders had lovely views of this legendary species at close quarters.  Surely nothing evokes the autumn more for the birder than Phylloscopus proregulus hovering among withered sycamore leaves! 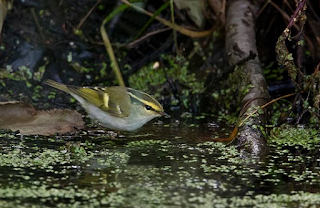 My last full day was spent locally in the morning where I found a spanking male Black Redstart and then in the afternoon on the east coast looking at ducks and waders.  Between de Waal and Oost I stumbled across a field with a nice assortment of waders, including 150 Ruff, 2000 Golden Plovers, a Grey Plover, Dunlin and Turnstone.   On the Waddenzee north of Oost were about 1000 Bar-tailed Godwits, 5000 Golden Plovers, along with thousands of Wigeon, Dark-bellied Brent Goose, a few hundred Avocets, along with stacks of Knot and other common waders and ducks. 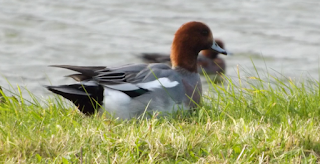 In the evening I ate at de Rog, now re-opened with new management, and still serving excellent food.  I had the Texel salad, which is chicken strips with cashew nuts, avocado and green salad.  This was washed down with the award winning Texelse Bok Beer.

After yet another successful autumn trip I am eager to do a spring trip, where I am told Bluethroats are in every bush and Dotterel are a safe bet.  Something to look forward to!

I would like to extend special thanks to Wietze Janse, Jonathan Janse, Jos van den Berg, Marc Plomp, Alex Bos and Vincent Stork for their assistance, friendship and hospitality and for the photos.  Thanks to Josie Plomp for the coffee .