In need of a break and with an interesting northerly blow predicted, I opted for a weekend in Lincolnshire from 4th - 6th September, 2015.  Knowing this was prime sea watching conditions for Gibraltar Point and the chance of some migration, I set off after work on the Friday.

The train was not as bad as it could have been, with the school holidays over and the carriage not too full, I arrived at Skegness just before 4pm and after checking in, in my hotel in Seacroft, I headed for the nature reserve.  A one and a half mile walk, often relieved by taking the path through the dunes, I stuck to the road, following information that recent high tides had made the coastal path treacherous.  My one departure from the route was to take the path into the dunes, which is a public right of way over the golf course, which was a good move, as I bagged a nice juv Cuckoo hawking insects there.

My first port of call in the reserve proper, was the hide over-looking Tennyson Sands, where I had three Spoonbills (there had been up to 18 in August); also here were three Spotted Redshanks and two Greenshanks, plus the host of Avocets and commoner waders.  Satisfied I had cleared up there, I headed for Mill Hill, the highest point on the reserve, and the favoured spot for sea watching.  Kev Wilson, the warden had just arrived and I set up my scope as he was getting onto an Arctic Skua.

In one and a half hours, which used up the best of the light, we had two middle distance Long-tailed Skuas moving south.  Juv birds, they showed the typical rakish jiz, faltering progress and very little of a white mark in the primaries.  A more distant bird going north, was less useful, but still identifiable.  Apart from the size and structure, the Arctic Skuas seemed far more direct and purposeful in their flight, the Long-taileds doing more shearing, and with a somewhat see-saw like flight.

A Kittiwake, several Sandwich Terns and a Common Tern were added to the list and we finished off with a failed search for a Garganey on the mere, though getting awesome views of a Barn Owl. Thanks go to Kev for the lift back to my hotel.

My digs, the Links Hotel in Seacroft, which is the posh end of Skegness, was a bit like entering the 1970s.  I expected chicken in a basket to be on the menu with its oak beams, white table cloths and red napkins.  Instead I had the meat and potato pie with chunky chips.  It was fantastic!  rather rustic but extremely competent and tasty.  The chips were proper man's chips with the emphasis on chunky!  It was all washed down with drinkable pint of Bateman's XXXB.

I opted for a packed breakfast, setting off for Gib at 5.30 on the Saturday morning.  There seemed to be a bit of a movement of hirrundines, including a Sand Martin, while on the reserve, I had a Peregrine, which put the 130 Black-tailed Godwits to flight.

I was a week late for the really good drift migration on the east coast, but there were still healthy numbers of Common Whitethroat, Blackcap and one each of Lesser Whitethroat and Common Redstart.

A sea watch produced another Long-tailed Skua, but closer than the previous evening's birds, as well as some really close Arctics, three Fulmars and then three distant Sooty Shearwaters.

After a break for lunch at the temporary visitor centre, where a Green Sandpiper came out of the creek, I headed for the east dunes and then out to Millennium a ridge.  A small party of birdwatchers were scanning the Wash, and one of them pointed out a very high raptor, which was moving south east some way to our right and so not quite overhead. I got the scope on the bird, and it was clearly a Honey-buzzard.  We watched the bird continue on its way and somewhat somewhat surprisingly head out over the Wash and was lost as tiny speck, on its way to Norfolk.

I added to the day list later with Common Buzzard to the west of the visitor centre, and then managed pretty passable photos of two Spoonbills on Tennyson Sands.

I managed a couple of hours birding on the Sunday morning, adding Great Spotted Woodpecker and Marsh Harrier to the trip list, but apart from numerous Siskin 'tueeing' around the reserve it was rather quiet in the beautiful weather. 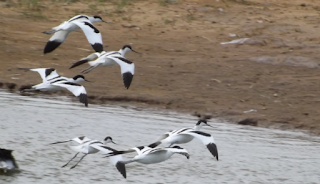 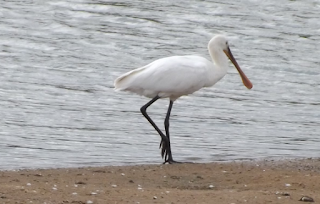