A long weekend in North Tyneside/Northumberland


My Mother had now been hospitalized for three weeks and with no clear date of her discharge I took the opportunity to take a weekend away in pursuit of Roseate Terns in Northumberland.

Covid-19 meant that my annual visit to Northumberland in June was not possible. However, news that Roseate Terns were turning up in the south of county opened up possibilities that could salvage my tern fix in 2020.  I had work in the morning, but finished early in order to fetch some urgent supplies for my Mum and set off in the mid afternoon on a train to Newcastle-upon-Tyne.

I had to change in Newark-on-Trent, the train from Nottingham stopping at Newark Castle, which is in the middle of the town. Oddly, the mainline station Newark Northgate is a 20 minute walk on the other side of the town. It's a short ride in a taxi, but it was sunny and with the cricket on my head phones, it was a pleasant stroll through the back streets of the Nottinghamshire market town to my connecting train.

LNER had made 'the difficult decision' to suspend catering on their trains, which meant no complimentary refreshments in first class. Hey ho.

I arrived in Newcastle in the late afternoon and as the train approached the station, I ordered a taxi to take me to Newbiggin-by-the-Sea, a small seaside resort near Blyth. I was dropped off by the coast and I set out to explore the beach between Chapel Point and Beacon Point, a rocky stretch off coast with a muddy foreshore. There was an attendant gang of gulls, including several Mediterranean Gulls of various ages. 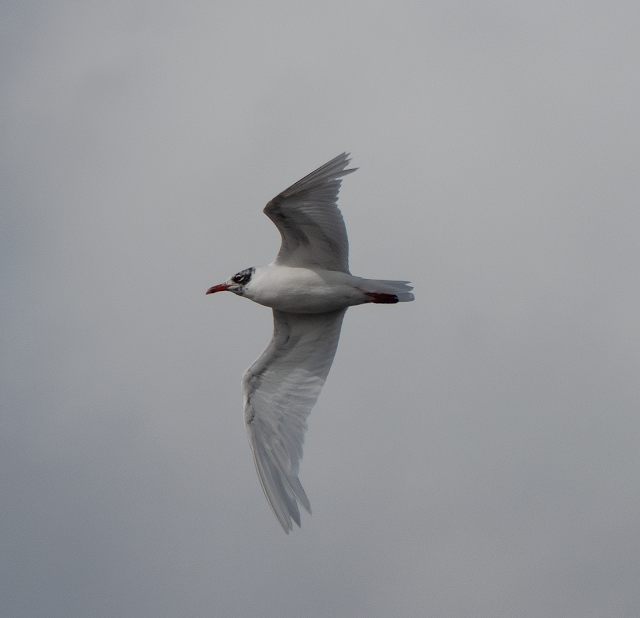 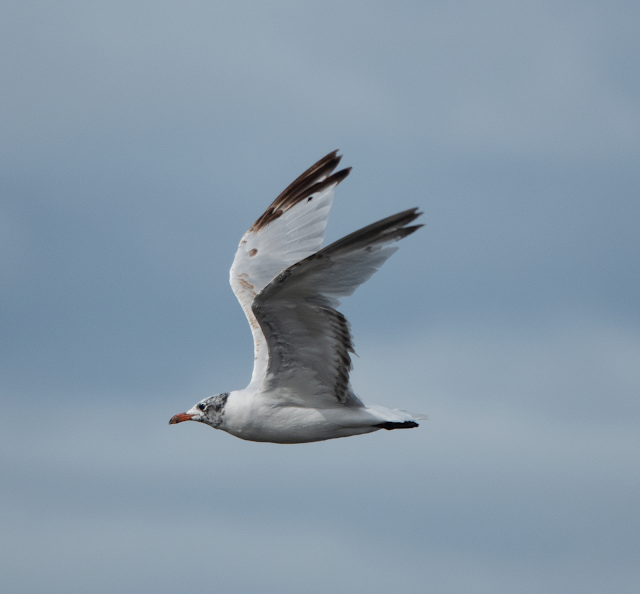 
Further along the beach an adult Arctic Tern hovers right in front of me and gives an amazing display of aerial skills. Okay, not quite the touching distance views of Inner Farne, but closer than just about anywhere else. 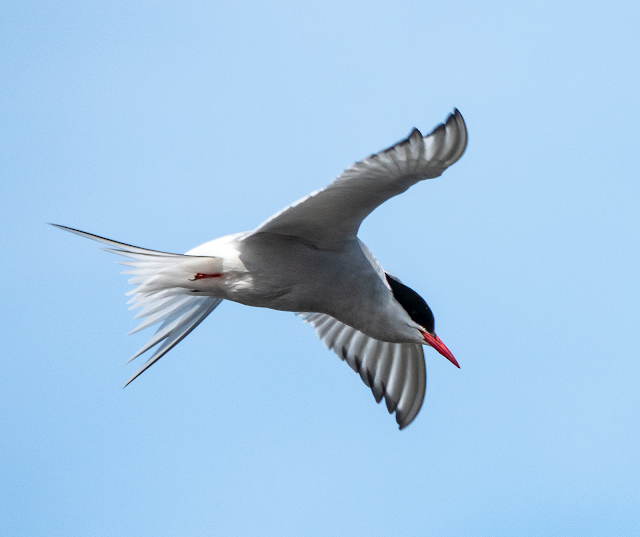 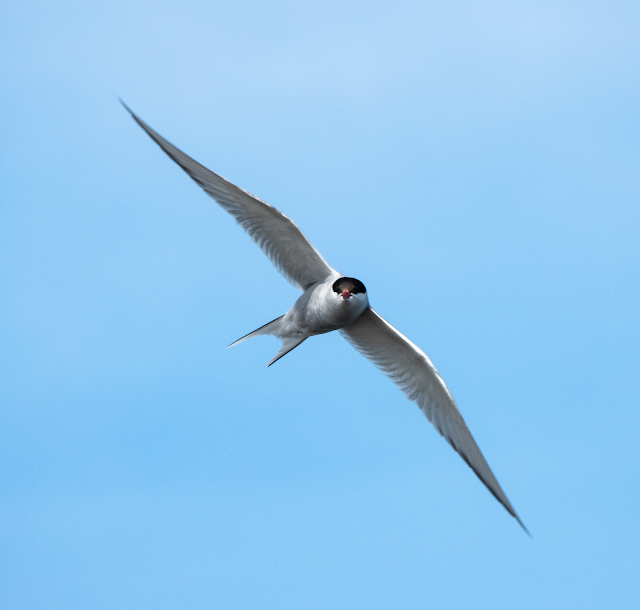 I jumped from stone to stone towards Beacon Point where a few terns were already gathering, although generally too far off for a photo, however three commoner species were there, plus a few Roseate Terns. I would probably have got good views with a scope but I hadn't bothered packing my full equipment for this weekend. Somewhat closer than the other birds was an adult Common Tern, which was watching over a juvenile that was roosting nearby. 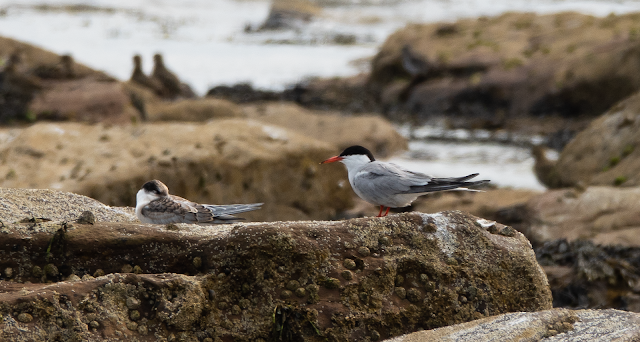 A few more terns were arriving from the north and were collecting on the rocks, as the tide was rising. After another 30 minutes the most distant rocks were being covered by the tide and pushed birds to another set of rocks in the middle distance, but still not really close enough for some useful images. However, with the bins it was now possible to pick out Roseate Terns, which aren't all as obvious as you would expect. The very long tail tail streamers were now largely worn off, so that most birds had tails no longer than Common Terns.  At range, the altogether paler plumage of Roseate Tern stands out as a useful id feature, although as they moved closer, this was less reliable. The bill colour was the most variable feature. There seemed to be four main forms - An ostensibly all black bill; a black bill with the slightest hint of red around the gape; a bill that was about half red/half black and a bill that was two thirds red with an extensive black tip.  The final feature, which clinched Roseate Tern was the rather vivid orange rather than red legs, which were very obvious in the field when compared to Common Tern.

There were certainly classic Roseate Terns, which stood out from the crowd, but not all birds were instantly identifiable without recourse to noting the suite of features, although after a while I could pick them out without too much difficulty.

The juveniles were very obvious, being more like miniature dusky Sandwich Terns, rather than resembling Common or Arctic. 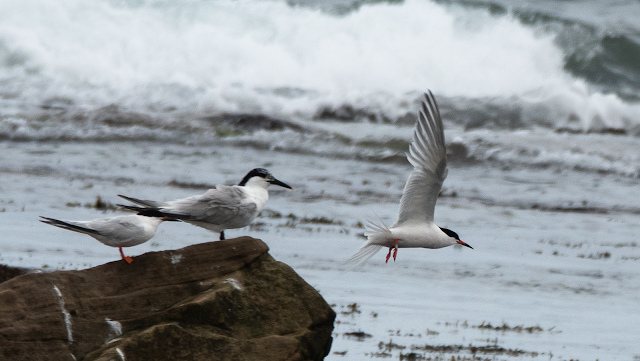 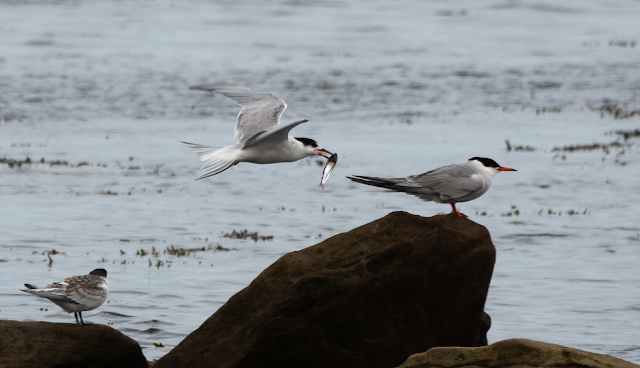 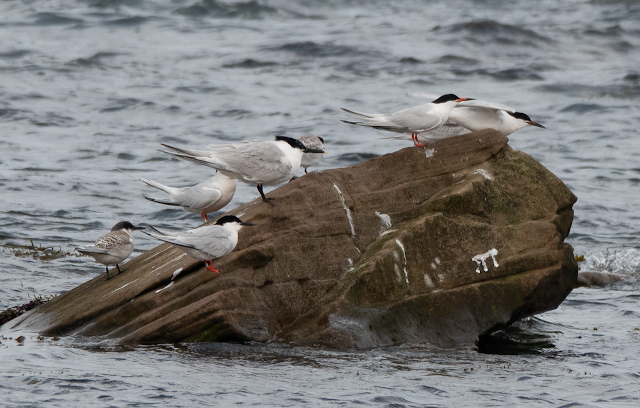 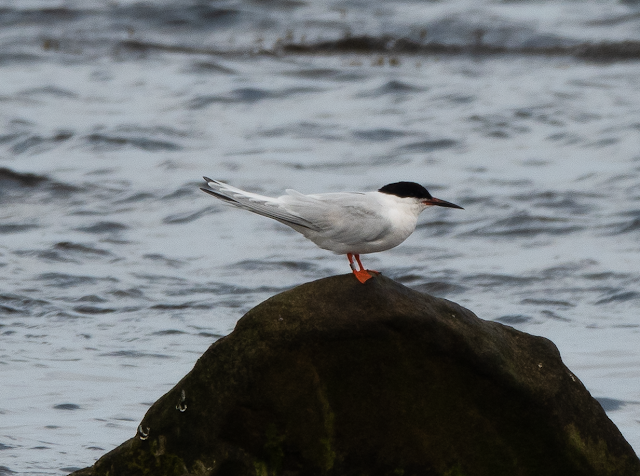 By 6.30pm the birds had come as close as they were going to and I walked back along the coastal path into Newbiggin abd caught a taxi to St.Mary's Island where Roseate Terns had also been reported and because this was a stone's throw from my accommodation it seemed to be a good plan. Well, it would have been except, it was now almost high tide and all the rocks were completely under water. It wasn't birdless though and there were dozens of Sandwich Terns fishing off the sea wall and a few Kittiwakes flew past. However, it was 8pm and I was hungry, having skipped lunch and the proprietor of the guest house came to pick me up. 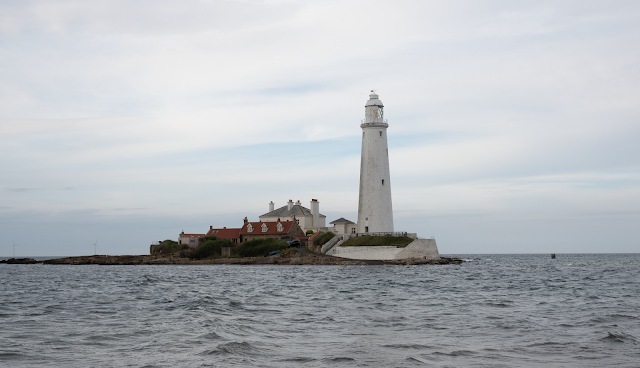 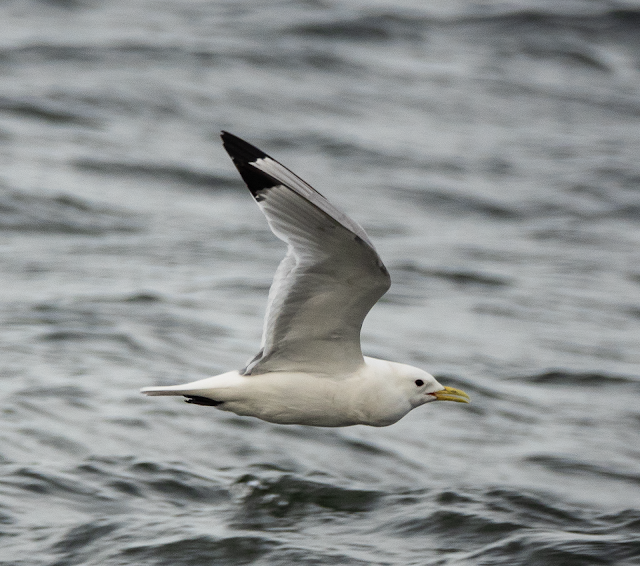 Kittiwake - with a full crop

The Saturday morning, contrary to the weather forecast was dry and bright. I set off for St. Mary's Island, having gained permission to visit, as it was still officially closed owing to Covid-19. The causeway had just about become exposed and I made my way across, walking slowly, so as not to disturb the terns that were assembled on the rocks. This strategy was undermined by a seal volunteer warden who strode along in her hi-vis jacket putting the birds to flight. This at least allowed me to get a few photos, including Sandwich Tern and a juvenile Arctic Tern. 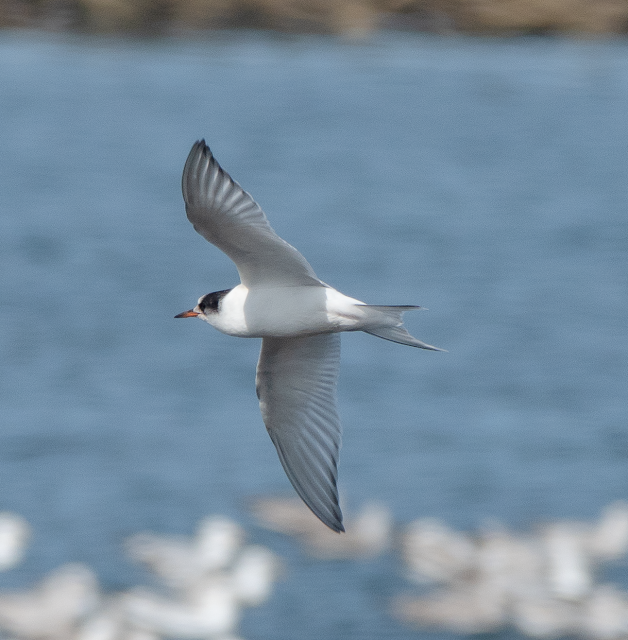 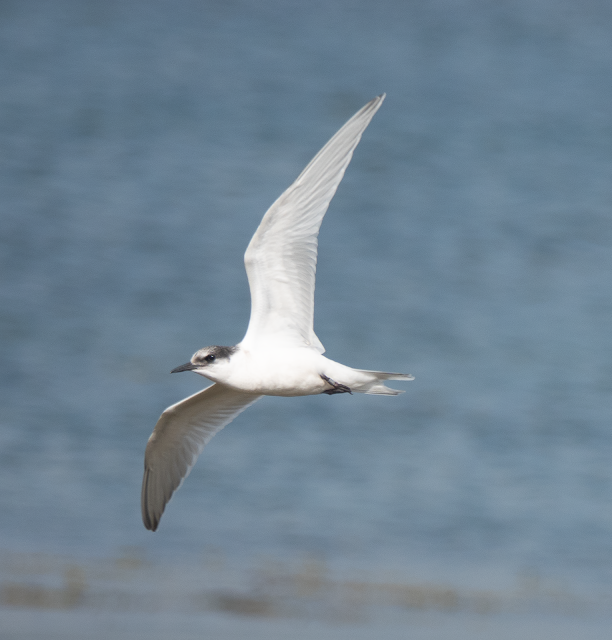 I walked up the steps past the lighthouse and scanned the rocks for birds. Apart from a Mistle Thrush, which looked rather out of place - a migrant? there wasn't much to see. However, this changed as several flocks of European Golden Plovers flew in from the north and flew around the island, some coming very close.

The birds were beginning to settle down on the rocks to the south of the causeway and on my way back, I paused to get a nice image of the birds. 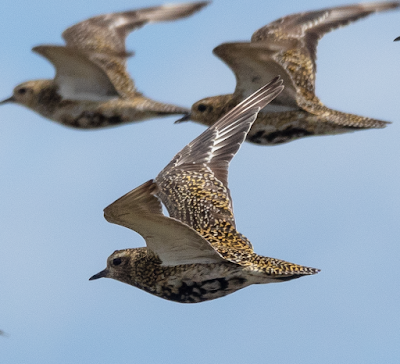 I plodded around St. Mary's Island, which actually includes part of the mainland rather than just the island per se.  It was rather quiet, although I did see a several Curlews, one of which was relatively confiding and a  couple of very fresh juvenile Northern Wheatears, presumably recently down from the hills. 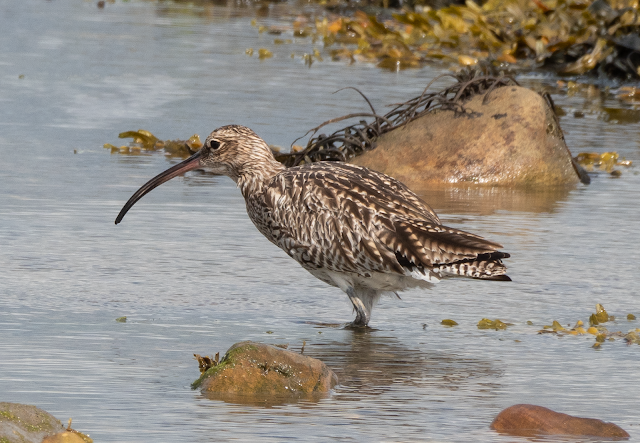 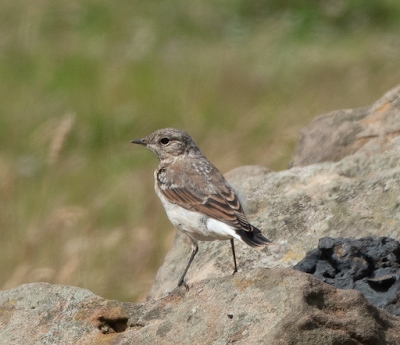 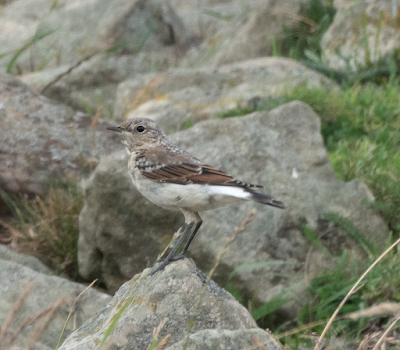 I continued to Seaton Sluice and rather than the forecast heavy showers, I was bathed in sunshine and had to apply some sun block.  A Meadow Pipit that had been singing by the coast path alighted on a fence and allowed very close approach. Very photogenic birds are pipits.  I took the path along the Seaton Burn, in the hope of seeing a Dipper but it was very quiet and I had only Nuthatch, Coal Tit and a family of Bullfinches to show for my three miles walk. By the time I arrived at Holywell, where the hide was locked that looks over the pond I was thirsty and peckish, even after my huge full English - but that was some five hours earlier.

I entered the Milbourne Arms and ordered a Swedish Blond. No, it wasn't some dubious sideline to make-up for loss of takings during the lock down but the name of a local brew. 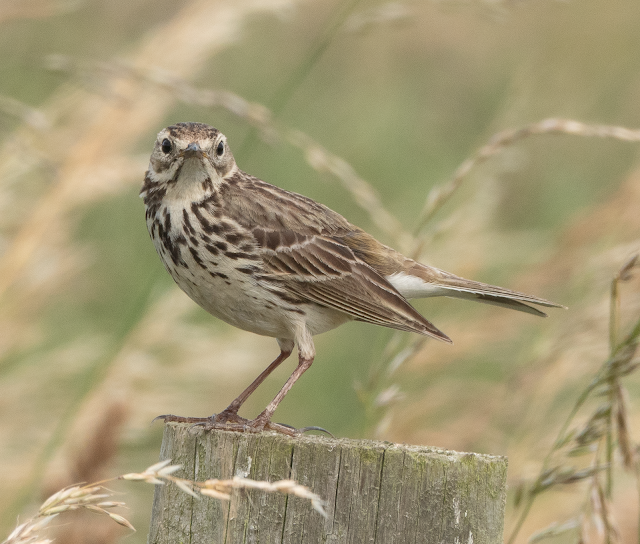 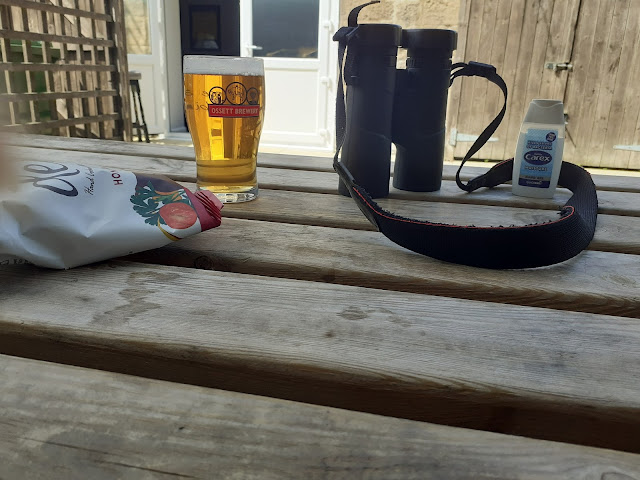 I planned to do the terns again, so booked a taxi to pick me up from outside the pub.

I arrived at Newbiggin-by-the-Sea at about 4pm and couldn't resist an ice cream from the vendor that was parked in the car park at Church Point.  I took a slightly different route to Beacon Point and came across a bunch of gulls on the beach, including a couple of very attractive looking juvenile Mediterranean Gulls and I rattled off a few nice shots. 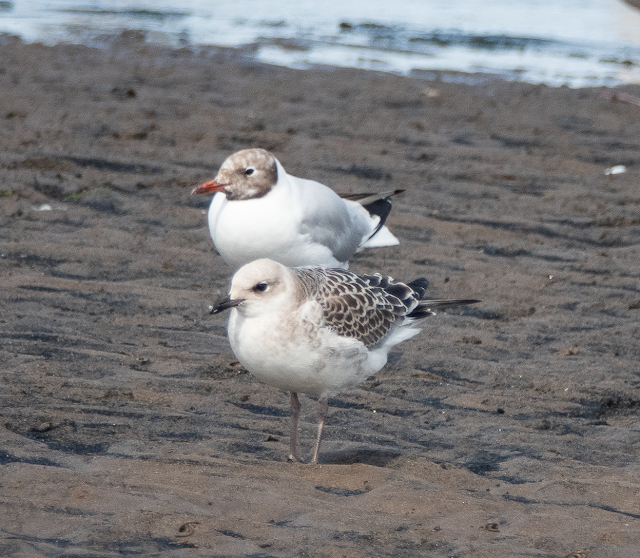 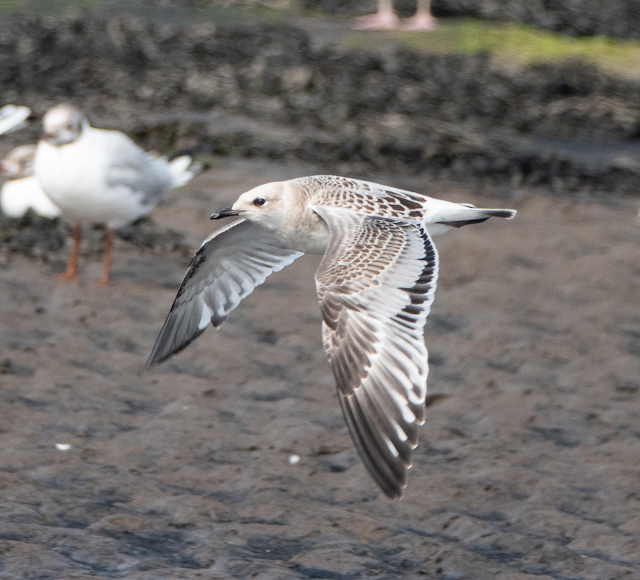 There were generally fewer birds around the rocks than on the previous evening and when eventually more birds did arrive, the high tide wasn't so high as on Friday and the birds weren't pushed on to the nearer rocks. However, it was swings and roundabouts, as there were now 22 Roseate Terns present, compared with the eight seen the previous day. The favoured sloping rock held a minimum of six birds along with a few Common Terns. 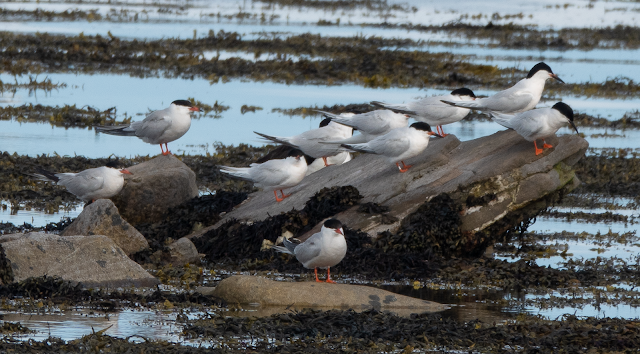 
I only had half a day on the Sunday, but it was quite profitable, with another visit to St. Mary's Island. There were fewer birds on the rocks and being a sunny morning, crowds soon assembled on the rocks, scaring everything off the causeway.

However, farther inland I had a quipping Common Quail, a reeling Grasshopper Warbler and a Blue-headed/Channel Wagtail type bird among seven or eight flavissima. Among the common stuff, a Reed Bunting was particularly obliging for the camera. 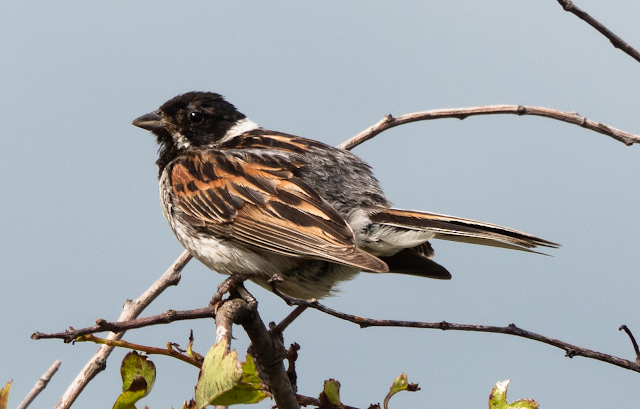