This was my second trip to Northumberland this year, after a mid summer trip for the breeding birds on Inner Farne. With a fair wind I hoped for some migrants and explore the area around Seahouses where I stay.

After my train journey to Berwick was delayed by 40 minutes, I missed the connecting bus to Bamburgh, meaning I had to get a taxi, which wasn't an arm and a leg exactly, but money that could have been spent better elsewhere. Regrettably, this experience is all to common on our broken rail service, and a 23 minute delay was blamed on a vehicle colliding with a level crossing near Stevenage. Why we were getting progressively late as we headed north went without explanation.

Being dropped off near the castle, I headed for Stag Rocks, where I figured the first Purple Sandpipers might be gathering. However there was nought but Turnstones and the odd Common Redshank. Off shore Sandwich Terns and Gannets were dive bombing the waves.

A storm building off shore looked menacing and fearing a deluge I sheltered in the lee of the lighthouse wall. Fortunately the ensuing downpour wasn't as cataclysmic as I had feared, but put paid to any birding for half an hour. 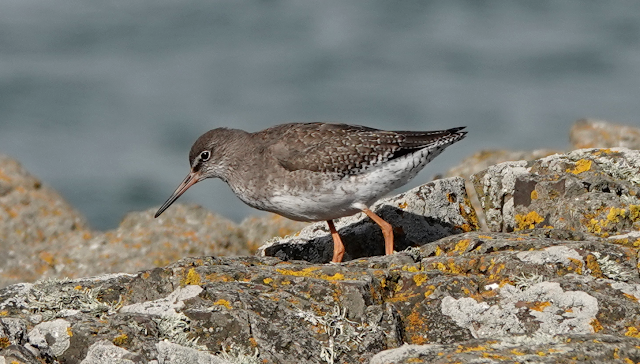 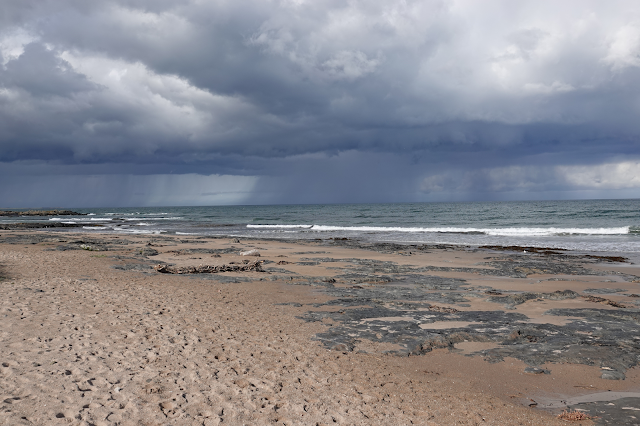 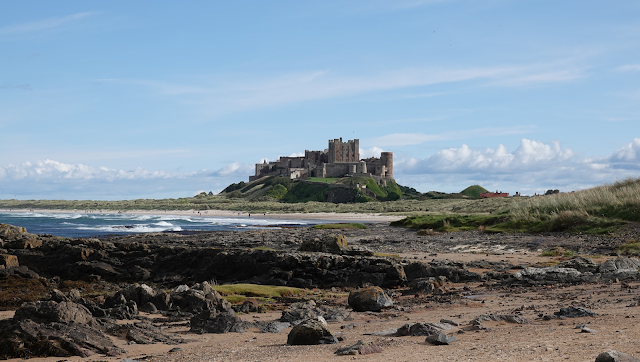 Bamburgh Castle from the north

There seemed nothing in the way of migration and House Martins were still tending their nests when I returned to Bamburgh, where I got a bus to Seahouses. The castle is surely one of the most aresting in the country, dominating the coast in its grandeur.

Checking out the harbour area at Seahouses, Oystercatchers, Turnstone and Common Redshank were the stock species and several Great Black-backed Gulls were loafing around the harbour walls. 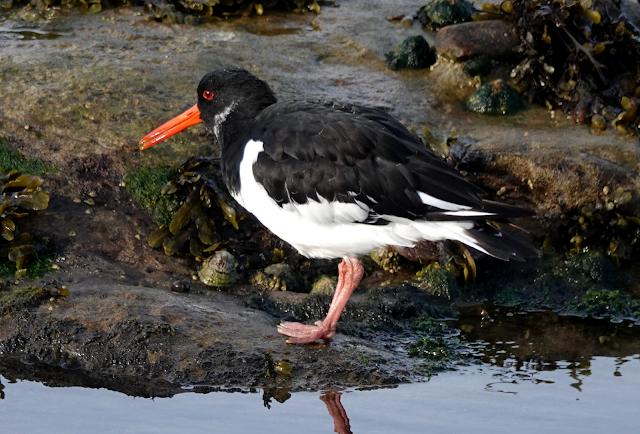 Feeling decidedly peckish after my long day, I decided to grab some dinner before dropping off my gear at my digs. Exploring the beach and rocks at Annstead, I saw a handful of common waders, including a Bar-tailed Godwit. The bird was rather nervous but flew close enough by for a passable record shot. 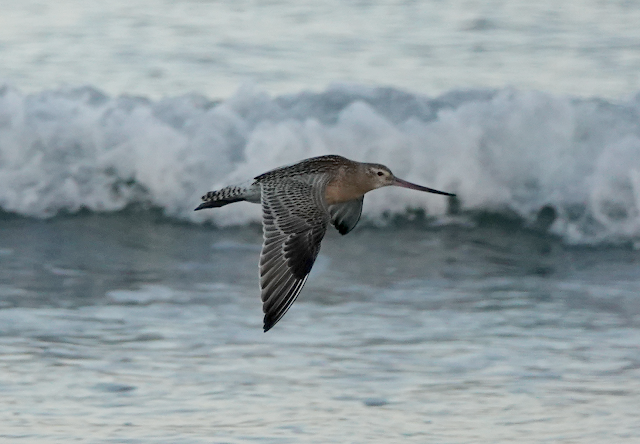 The following morning was dry with high cloud, producing a rather milky sunshine. I checked out Seahouses harbour where there were the usual smattering of waders including several Curlew and some ridiculously approachable Eider. I'm told these bird have taken a liking to fish and chips, at the expense of thin egg shells. I don't suppose this tameness will result in the same public anxiety that has been associated with Herring Gulls. 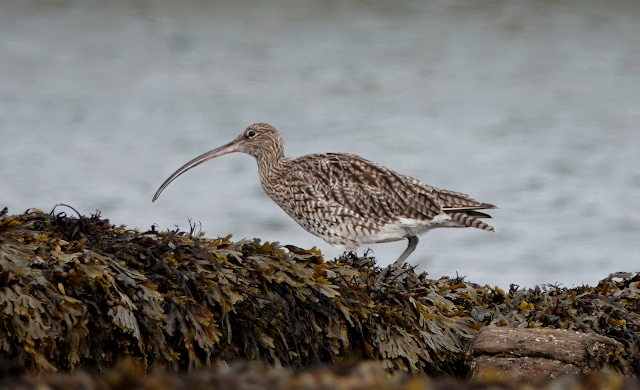 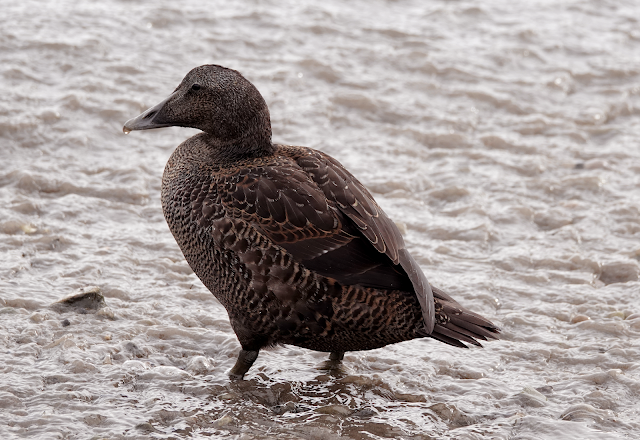 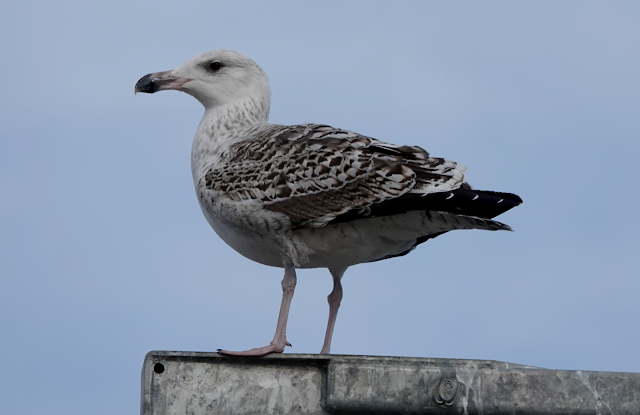 As the clouds thinned out, I headed north along the Bamburgh road for about a mile until I reached the roadside pool at Monk's House. Here there were several Grey Herons, Shoveler, Eursian Teal and three Black-tailed Godwits. One bird was feeding, but the other two remained resolutely asleep for the 30 minutes I was there. Since first light Small skeins of Pink-footed Geese had been moving south east and were the only sign of migration. 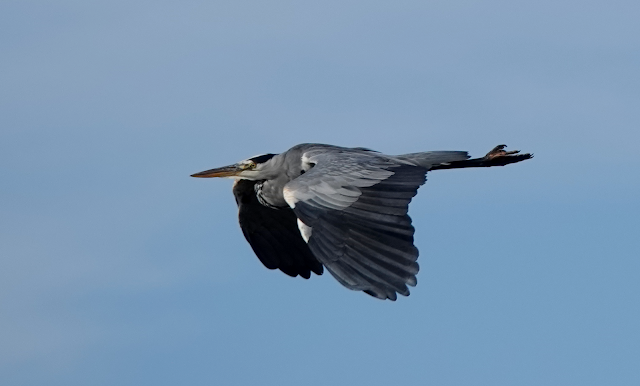 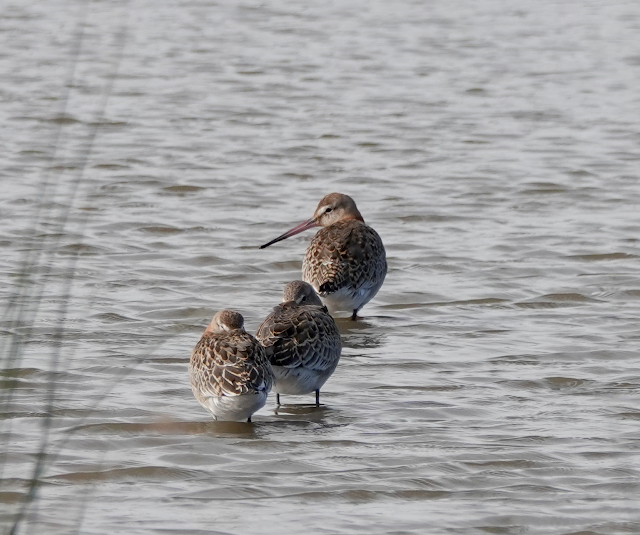 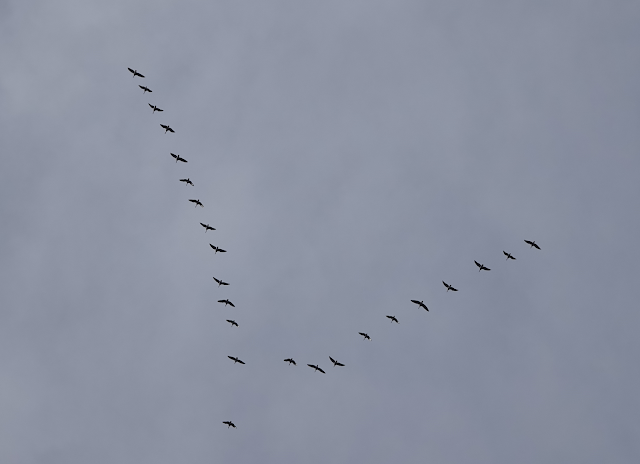 Walking back to Seahouses, the tide was coming in, meaning that waders were coming a bit closer, if one could deploy the right field craft. Finding a boat moored where the water was lapping around the keel, I managed to position myself such that birds approached close enough for me to get some decent shots, including a nice juvenile Ringed Plover.

Walking south past Braidcarr Point there were a few Grey Plover, although the rising water meant I couldn't very close and only managed a barely satisfactory record shot. However, it's the only time I have photographed this species - so until I get a better opportunity... 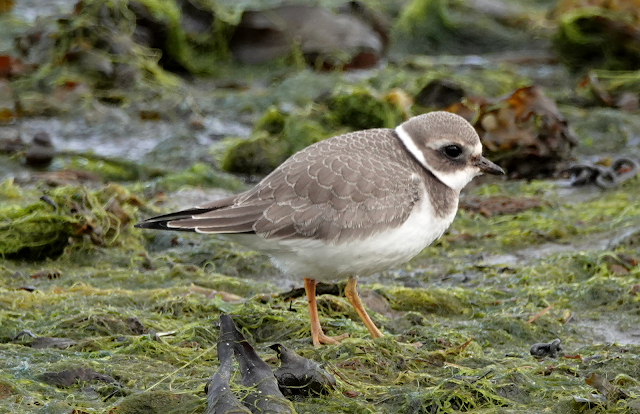 
After a light lunch I headed south, picking my way through Annstead Dunes, in the hope of kicking up a migrant. However, the persistent westerly winds meant there wasn't even a sniff of migration. Not a single crest, Chiffchaff or anything.

Continuing on to Beadnell, I saw a female Goosander loafing on the rocks. Finding a bench from where to watch the coast and high tide roost, I was joined by local birder Lucy McGregor. She suggested we go and check out Budle Bay. Accepting the lift, we drove north and parked up in the layby that overlooks the bay. There were stacks of commoner waders, along with good numbers of Shoveler, Eurasian Wigeon and a few hundred Pink-footed Geese on the far shoreline.

On the way back, we checked out Stag rocks, but no Purple Sandpipers were showing. At the nearby golf course, with the light fading we checked a large flocked of Linnets, and a hopeful Kestrel, which showed beautifully, lit by the setting sun. 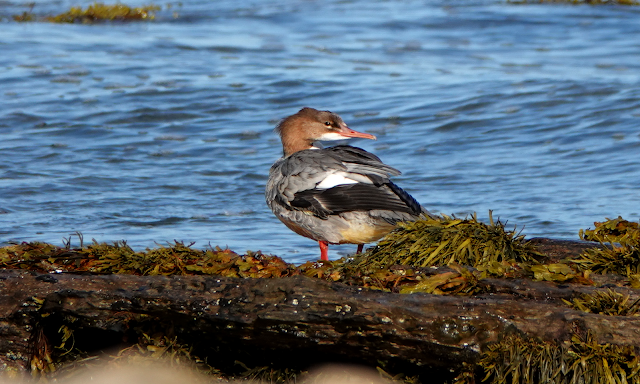 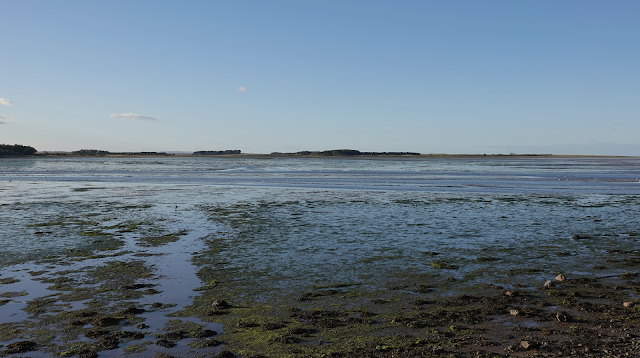 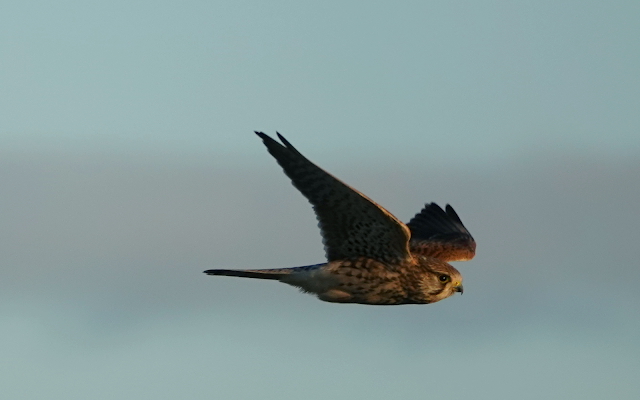 The following morning began with unbroken sunshine and a walk around Lowgos Bay provided some excellent photographic opportunities, including a lovely Rock Pipit.

In the absence of any migrants, I opted to embark on one of the 90 minute cruises that go around all the Farne islands. Birdlife was in short supply and I even failed to capture a Gannet, struggling to track the birds on the bumpy sea. However, the Atlantic Grey Seals were performing on the rocks near Staple Island. It's great to see these mammals up close.

On arriving back at Seahouses, Common Starlings were gathering on the harbour wall, and the adults looked amazing in the sunshine. These are such splendid birds with their plumage and iridescence. I had just enough time to grab my bags from the digs and catch the bus back to Berwick and my train home. 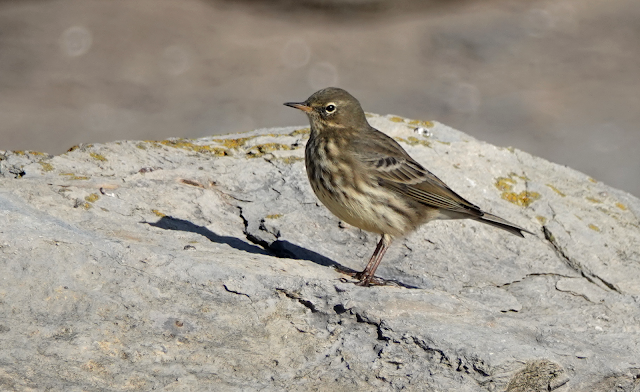 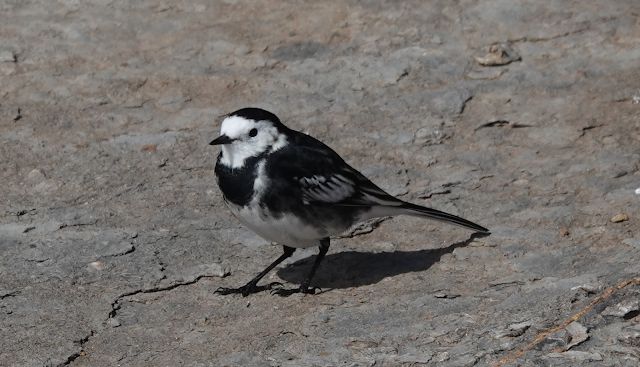 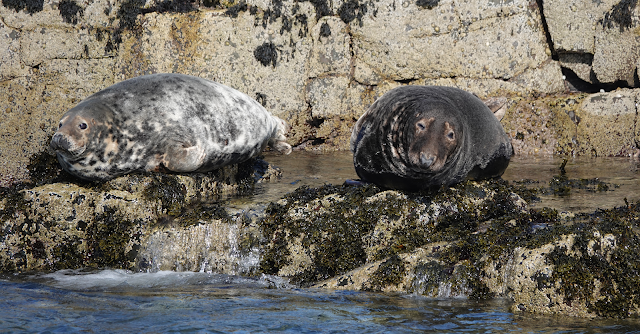 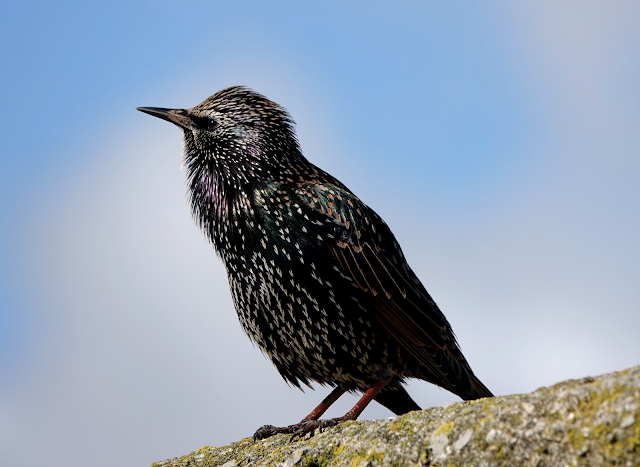