Having spent a fruitless two hours at Wollaton Park the previous day, searching for Lesser Pecker I decided an early start was called for.  I'm up at six and out at 45 minutes later and get on the park at first light.

I begin my walk up the tree-lined avenue adjacent to the golfer's car park and within minutes I hear the distinctive drum of a Lesser Spotted Woodpecker, shortly followed by another.  It's quite different from Great Spotted, being a noticeably longer sound and ending abruptly compared to the larger bird's drum, which fades at the end.  It drums again, and then something must have spooked it, as a flock of 40 Redwing take off from the ground and I don't hear it again.

I continue to the lake and slowly work down the east side, where I see a few Siskin feeding on the ground. The birds are quite approachable, but with the sun barely up and with thick cloud, a photo is out of the question. Suddenly the whole lot get up and I realise there's about 70 birds and they all begin working their way through the alder cones. I also get good views of Tree Creeper, Great Spotted Woodpecker and hear Green Woodpecker.  I keep one eye on the time and decide I need to head to the Derby Road entrance, as a Lesser Spotted Woodpecker calls briefly from the golf course.

I get on the 36 to town and then take the tram replacement bus to the station, where I get a train to Sutton-in-Ashfield. I'm disappointed to find that AMT Coffee has closed and my Froffee fix no more.  I get a chocolate croissant and coffee from Morrison's but it's not the same.

I'm soon trundling north on the train and alight at Sutton Parkway.  My mate Paul Naylor is at the station, and together we head north west to Stanton Hill and the entrance to Brierley Forest.  I have directions from Stevie Dunn on a bird feeding station where Willow Tit are nailed on.  I remember when these were common birds, but now you have to be extremely lucky or know where to look.

We find the feeders, which are receiving attention from a good number of Long-tailed Tits, eight Robins, a Coal Tit and the usual common birds.  A nice Yellowhammer puts in an appearance but is nervous and doesn't stay still long enough for me to get a decent shot, in the poor light.

After 30 minutes, we're beginning to wonder if Stevie was pulling our leg, when the unmistakable, nasal  'Zi zi daaa daaaa daaaa' emits from the bushes and we see a Willow Tit at the back of the feeding area.  Rather than grace the feeders it shoots off to our left and continues to call intermittently and makes one more brief appearance above the feeders. 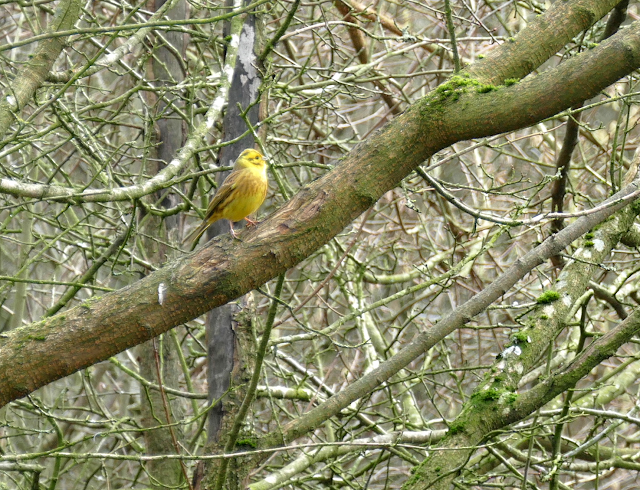 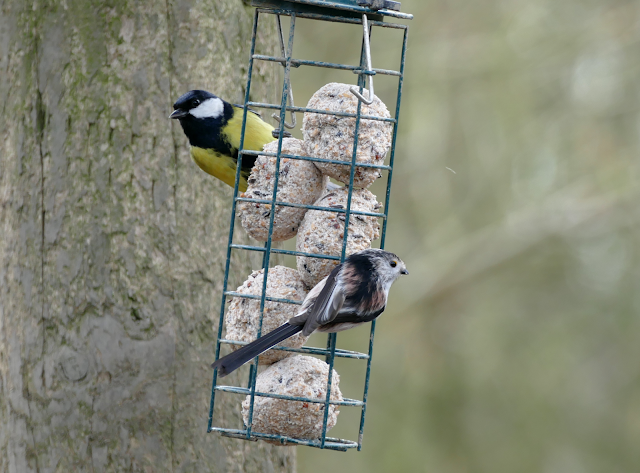 
Paul drops me back at Sutton and I get the train back to 'Notts.'