Having cancelled the Texel leg of my trip, owing to the Covid-19 quarantine rules, I had originally planned a few days at Spurn, followed by a short break on Scilly. However, with the Northern Isles looking good, I made a last minute change to my plans and booked on the ferry from Aberdeen to Lerwick, departing at 7.30pm on 7th October.
I had a new camera, and was looking forward to putting it through its paces. I had obtained satisfying results with my Sony bridge camera, but had never felt the need to jump to DSLR. However, after some research on what was on the market and impressed with Sony's technology, I decided to buy an A9 full frame mirorless camera, coupled with a 200-600mm zoom. Although the A7Rii boasted the 42MP sensor, I was lured by the A9 with its 20 FPS burst speed and larger number of focus points.
I disembarked in Lerwick on the Thursday morning with a little rain the air, and explored the old harbour, where Black Guillemots were remarkably confiding, but with the sun barely risen, I didn't attempt any photos. I checked into my B&B, dropping off my suitcase before being met my Stanley Manson, who would provide my wheels for the three days.
The Shetland scare and rare bird apps would be my source of news, and the idea was that I would just go for whatever was around. A Tennessee Warbler on Unst had not been since a brief sighting the previous morning, while Red-flanked Bluetail and Pallas's Grasshopper Warbler on Whalsay had both appeared to have cleared out the previous day, leaving me with somewhat leaner pickings. However, this was Shetland and it was exciting to be birding there.
We headed south, first in search of two Hawfinches, but these appeared to have moved on and then a Bluethroat, which was equally elusive. A stop at Gulberwick was no better, as a Long-eared Owl from the previous day had departed. However, I was buoyed by a Common Swift, which shot through, wheeling over the rolling landscape, and I managed a record shot, of what is my latest record of the species in the UK. 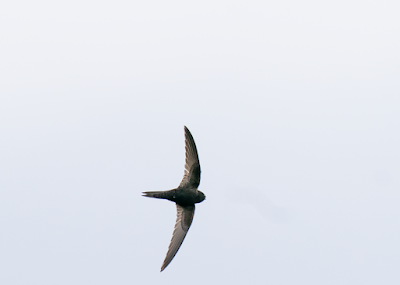 Common Swift
Continuing on to Sumburgh, where a Great Grey Shrike had been reported - on the farm there, there was no sign of the bird, so we continued to the head, passing the Fulmar colony and then onto the car park, where good birds can often turn up. I got out of the car and a light brown bird flew out of a field at the lower end of the car park and alighted on a grassy slope to the north. It was a Shorelark and I got reasonably close views and a couple of nice shots. 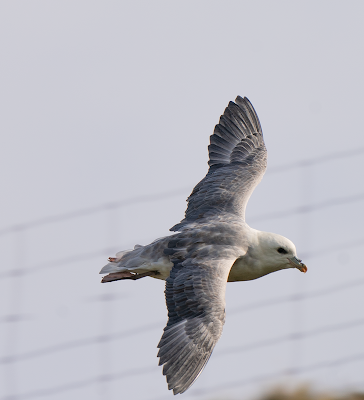 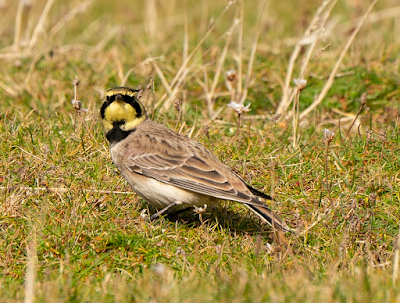 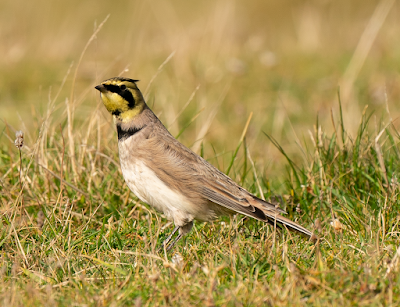 Shorelark
Returning north, the app alerted me to a Red-breasted Flycatcher that was apparently showing well near the Croft Museum at Boddam. I turned up to hear that the bird was showing intermittently but hadn't been seen for 20 minutes. The two birders there left me to refind the bird and I wandered up the path to a garden with lumps of wood and pretty flowers. Just as I was thinking how nice it looked for Red-breasted Flycatcher, the bird flew in and perched up in the open for a full minute. I reeled off a load of photos and then it moved to a wall where it continued to show at quite close range and I had the bird all to myself. 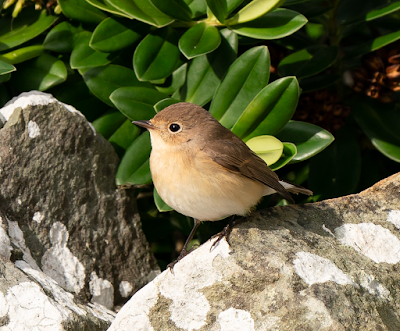 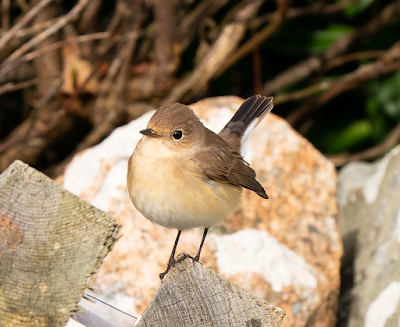 Red-breasted Flycatcher
Stanley dropped me off at Lerwick, and I caught the ferry to Bressay, a small island that sits just off Lerwick.  There were a couple of Shags sitting on a buoy just off shore and a Kittiwake was perched on some gantry by the docking point on Bressay. 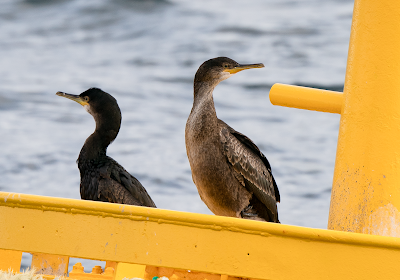 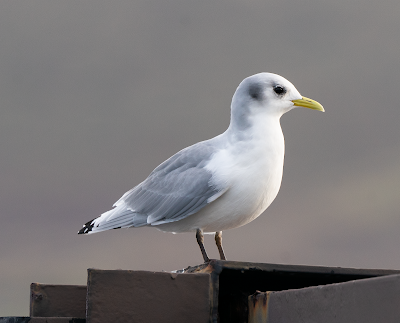 Kittiwake
Bressay itself provided a few bits of interest, including a Yellow-browed Warbler, a single Brambling and a little fall of Blackcaps.
Dinner was at No.88 in Lerwick, which is a bistro type restaurant, serving a modern menu. I had a starter of pork belly with puffed spun rice cages. Main was baked Sea Bream and so far so very good. The meal was let down a little by the dessert, Tiramisu - which was 'deconstructed' and while not unpleasant would have gone down better had it been of the traditional variety.
The next morning, we headed south again and I looked around the garden at the Sumburgh hotel but there was nothing doing. I decided to have another go for the Great Grey Shrike at the farm, although a group of Scottish birders had said they had looked for it without success. Undeterred, I continued past the outbuildings there and surveyed the first field and saw the bird sitting on a fence at the far end. Unfortunately, two photographers turned up and despite my efforts to convince them to work slowly along the wall, in order to get closer to the bird, they insisted on marching across the field, stating - oddly - that the bird would fly before they got close enough to get good shots #noshitsherlock.
I managed to reel off one or two record shots before they flushed the bird. It's a shame because I could have got so much closer on my own. 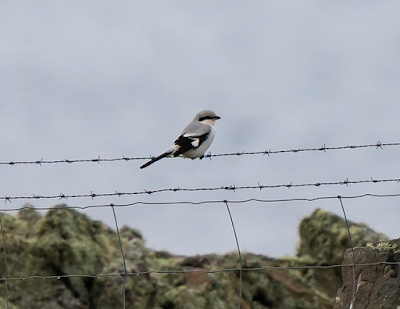 Great Grey Shrike
Walking back to the hotel, a herd of Whooper Swans flew over and a little party of Redpolls, alighted briefly in the garden. I think one was leaning towards Mealy. 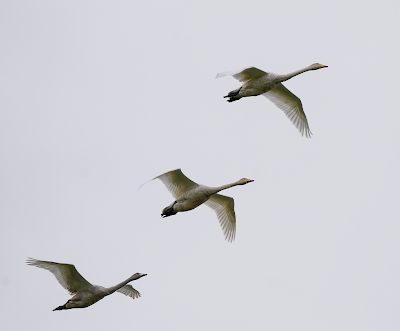 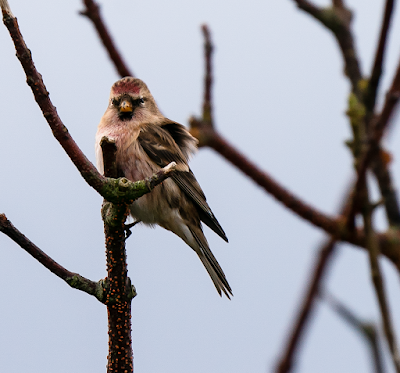 Redpoll
News of a Blyth's Reed Warbler at Spiggie below the hotel was conveniently up the road, and I and another birder located the bird quickly in a clump of Stinging Nettles and thistles. After a few tantalising views the bird showed very well and displayed the classic 'banana posture' and short primary projection. I was still getting used to the camera settings, which I had now had a full week. I think the photos of the warbler were slightly off, but still acceptable. 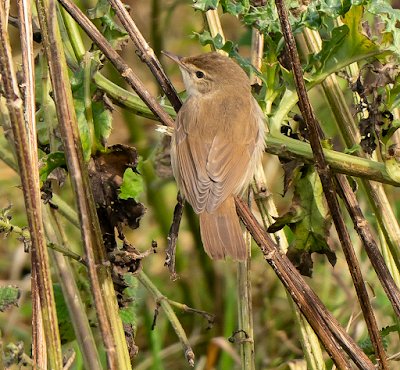 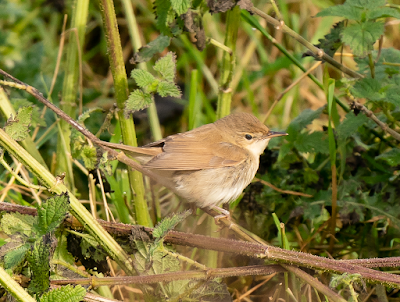 Blyth's Reed Warbler
Satisfied with these views, we tried for a Dusky Warbler, but looked like it would be a tricky bird in a dense crop where even sheep were hiding, so we pressed on to Quendale. There was nothing rare here, but I did get ultra close views of Siskin feeding on the seeds of weed heads, and obtained a nice shot or two. 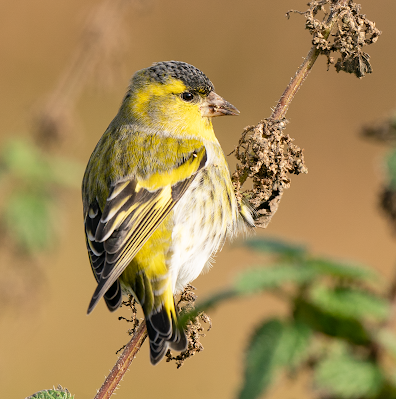 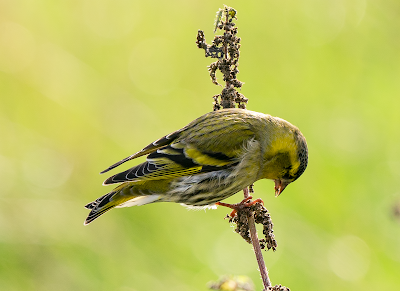 Siskins
Heading north, I had Stanley stop at Cunningsburgh, which had a promising look about it. I had a walk round here and saw a few Twite and Linnets feeding among the weedy crops. Then a bird caught my eye, as it flew up from the edge of a crop and landed in a nearby garden. It was an eastern type Lesser Whitethroat and I got some really nice photos of the bird, much to the consternation of the schoolboy, whose garden it was in. 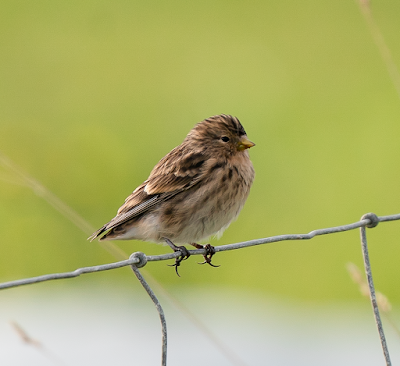 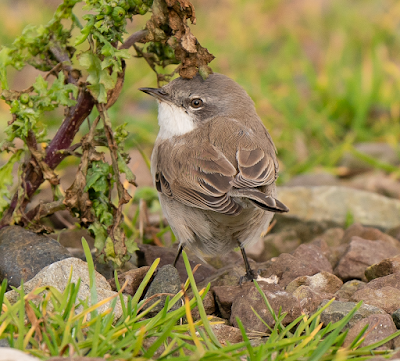 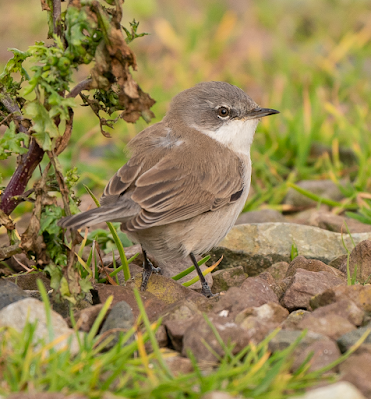 Lesser Whitethroat
Stanley dropped me off at Lerwick around 3pm, with the light crisp in the afternoon sun, perfect for photographing Black Guillemot. Can there be anywhere better to see the species than here? I plan to come back next June, so hopefully will get them in the summer garb. 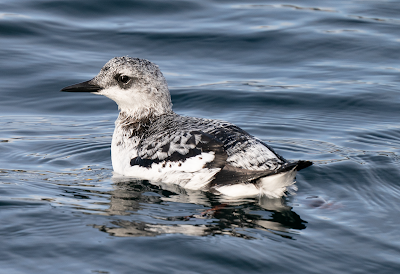 Black Guillemot
Since the new restrictions had come in to force, restaurants were forced to close at 6pm and as I was birding till dusk, I headed for the Thai Takeaway in Town, which had been recommended on the rare bird group. The lady who runs the B&B Auld Harbour Guest House said I could use all the facilities in the kitchen, so I gave my meal a quick blitz in the microwave (take aways are never hot enough) and ate my meal of Thai fried beef, noodles and crispy pancakes in the dining room.
It seemed a bit odd that Shetland had to be drawn into these regulations, when there had only been about 60 confirmed cases throughout the islands. While the tiered approach has been criticised as missing the big picture, genuine exceptions should also be taken into account, surely? Does a restaurant being open till 9pm rather than 6pm really represent an increased risk of spreading the disease? Anyway,  I was joined by Chris, Mike and Marek, who had just come off two weeks on Foula and they shared their beer with me and we talked birds till 10pm. All very convivial.
The next morning, I was up early and headed to the harbour and found some confiding Ravens, although I never had one on the ground, which would have been ideal, they perched up on nearby buildings quite close to. 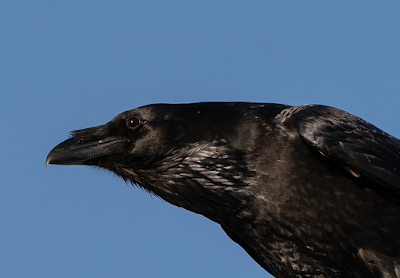 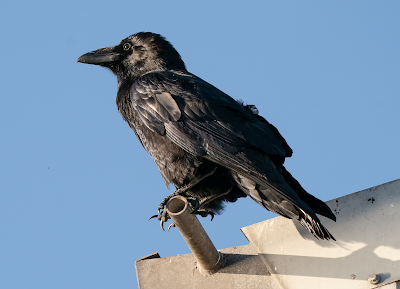 Ravens
It was my last day on Shetland and I was determined to make the most of it. News from Unst of Arctic Redpoll and Red-flanked Bluetail seemed to provide the best chance of good birding, with hopefully more goodies available on the day.
With all the ferries booked, we set off north and arrived on Unst at 1pm after being admonished by a ferry employee for getting out of the car and going on deck, which was reserved for foot passengers only.
As we headed to Norwick, almost on the northernmost point of the island, a bird flew up from the beach at Haroldswick and seeing a flash of rufous I asked Stanley to stop. Closer inspection revealed the bird as a Bluethroat and an adult to boot with a bit of blue on the breast. As I was watching the bird, Mya Rose Craig and her parents turned up and although the bird had flown around the corner, I understand it came back and they got good views. The Craigs are a lovely family and I wish Mya well with her efforts in encouraging ethnic minorities to access our hobby.
At the same site, a Red-throated Diver was fishing off shore, although it had swum a little further out by the time I got a photo. 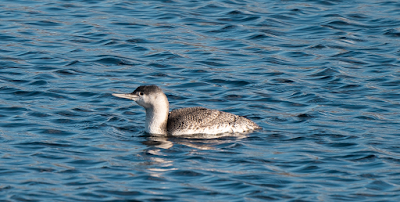 Red-throated Diver
After getting an update from Mya on the birds at Norwick, Stanley drove me to the car park there and I walked up the hill to the garden. After a bit of a wait, I managed to see the Coues's Arctic Redpoll, albeit with the sun behind the bird, but the Red-flanked Bluetail eluded me. However, also here was a Siberian Chiffchaff, Bramblings, Twite and Lesser Redpoll. 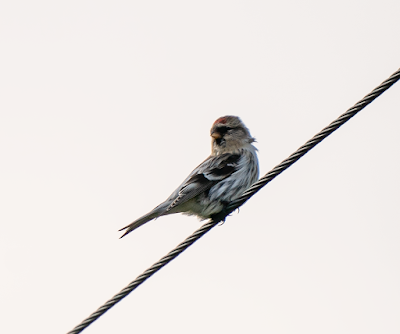 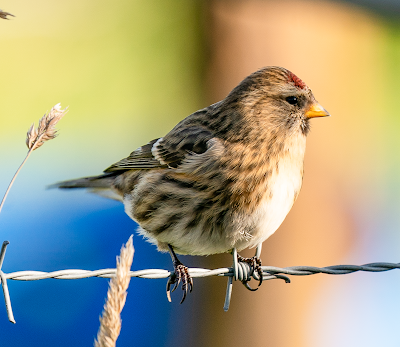 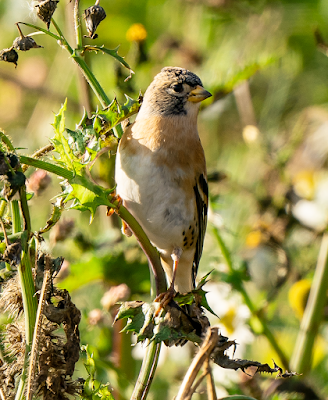 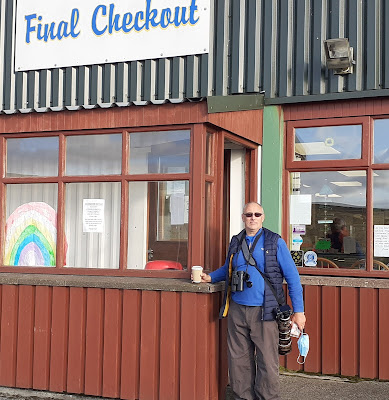 The Most northerly shop in the British Isles
Stanley dropped me off at the ferry terminal at 6.15pm, after a beer and nibbles stop at the Co-op, seeing as the ferry was now dry!
I had the Orkney Pie for dinner on the ship, in the company of Chris, Helena and Mya and Chris Turner. The crossing was smooth, unlike the way out, which had been bumpy enough to wake me in the early hours. However, thanks go to the good folk of Northlink Ferries for their care in social distancing and a hassle free journey.
In Aberdeen, Chris offered me a lift back to Nottingham. Although Marek was driving, but there was no problem and they squeezed me in. We had breakfast near Lanark at the excellent Cairn Lodge, a kind of up market motorway services.
Travelling via the Yorkshire Dales, and then going south on the M1 I noticed that we were passing within 2 miles of Collingham near Wetherby, where a Hoopoe was 'showing well' on a cricket pitch in the village.  Showing well didn't even come close and the bird fed on leather jackets at close quarters, unphased by its admirers. A Red Kite overhead was an added bonus.
Marek dropped me off at Trowell Services near Nottingham at tea time and I thank him and Chris for their company and what was a lot easier journey than bus and train from Aberdeen. 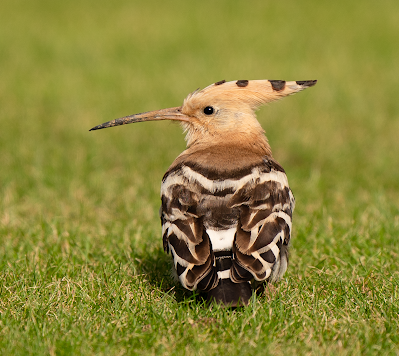 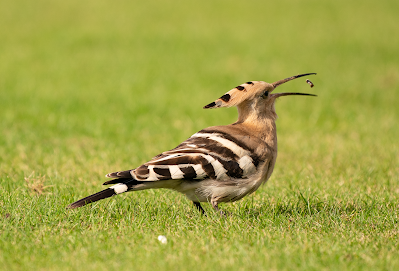 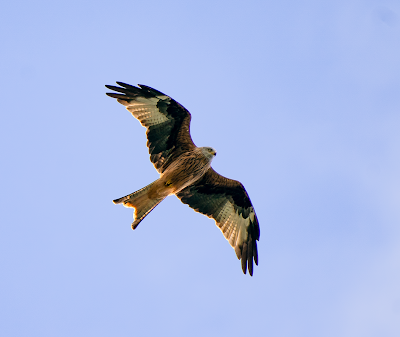