With two full days left of my early autumn holiday, I wanted to make the most of it and got my friend to pick me up on the Saturday morning with the aim of seeing some waders in Lincolnshire and whatever else might be about.

First stop was Freiston Shore. I made my way to the hide and as it was bang on high tide there were heaps of Common Redshanks in the shallows of the lagoon right in front of the hide.  I went through the flock and located just a single Spotted Redshank. However, it was the best views of the species on the day, so quality trumped quantity in this instance. 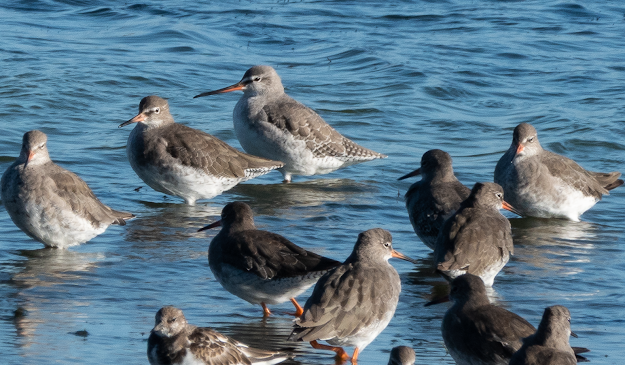 Spotted Redshank with Common Redshanks
Satisfied with these views, I headed for the sea wall. There was a lot of migration going on with Meadow Pipits streaming through as well as a steady passage of hirrundines - mainly Sand Martins and House Martins. I heard a Yellow Wagtail and by the 'beach hut' there was a male Northern Wheatear.
It was very birdy, but there was nothing in the bushes, just stuff moving through in the almost clear blue skies.
I checked the hide again, but all the Redshanks had flown off, although there were still a few at the back of the lagoon along with good numbers of Oystercatcher and Ringed Plover.
I had a coffee before we drove the 10  miles or so to Frampton Marsh.
Flashing my membership card, I had a look at the area to the left of the visitor centre and there were good numbers of Black-tailed Godwit, with two birds particularly close in. 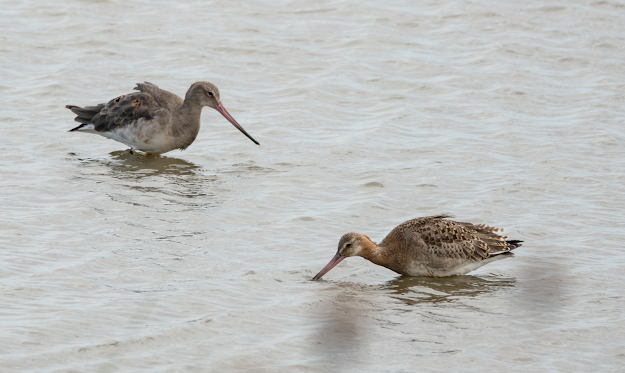 Black-tailed Godwits
I took a few photos and returned past the centre and along the path past the main lagoon. There were a few Spotted Redshanks and Ruff, but nothing especially close. The 360 hide was limited to 10 people and with nine already there, I entered with my conscience clear. There were a few Spoonbill and a smattering of waders but everything was silhouette, given the position of the sun.
I didn't linger long and passed the Reedbed hide, where the water was high. Turning the corner, I reached the east scrape, where the muddy edge comes close to the path. I noticed an elegant wader quite close to, which even with the naked eye I could identify as a Wood Sandpiper. Feeling pleased with myself, I watched the bird and got a nice photo. I turned to see county colleague, Tom Malarkey who gazumping my Wood Sandpiper, informed me that he had just found a Pectoral Sandpiper. Assuring me it was showing well, I got another couple of shots of the Wood Sand and made my way to where a small group of people were looking on to the scrape.
I lifted my bins but couldn't see a Pec. Asking the others, I was informed that the bird had just flown off.  I walked round to the hide, in case it had flown to the north end of the scrape - but nothing.  I returned to the car for my packed lunch, assuming that the Pectoral Sandpiper had gone and then walked along the main public path to check out the pools along there. 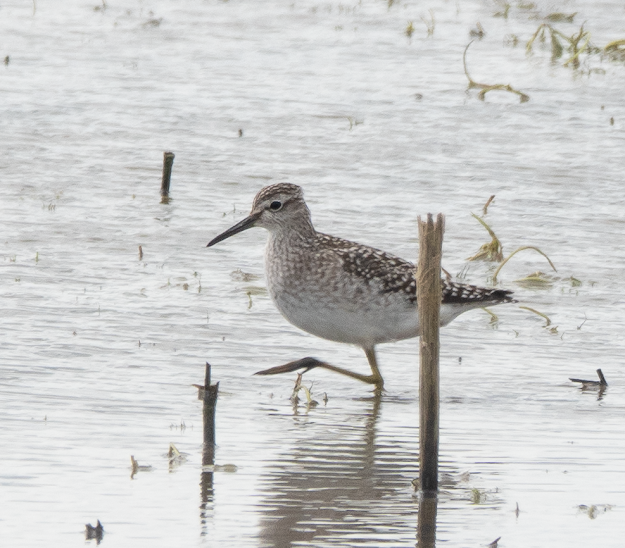 Wood Sandpiper
There were 12 Curlew Sandpipers, along with 2 Little Stints and a few Dunlin in one group on a 'closish' bit of mud, and I got a record shot of the three species. I pointed out the birds and I was surprised when two birdwatchers questioned the identification of the Curlew Sandpipers on the basis that their bills weren't curved enough. It seemed they were under the impression that the species sported a bill like their much larger and eponymous relative. I put them right and pointed out their white rumps as they flew but they didn't seem to get it. 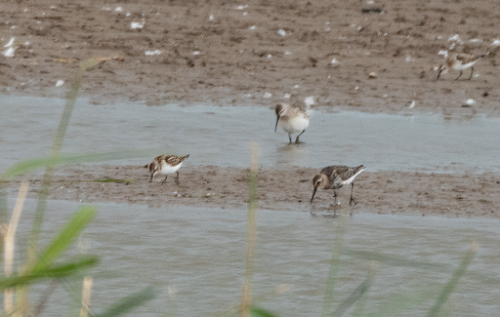 Curlew Sandpiper, Little Stint and Dunlin
Turning back with the intention of checking out the 360 hide again with the light now in a better quarter, I asked a passing birder if there was anything about and he said that the Pectoral Sandpiper had gone back to its original spot.
Not wanting to miss a good bird and with a second bit of the cherry, I headed back to the east scrape where another group of birders were standing around. I asked if the Pectoral Sandpiper was around, but in a case of deja vu, they said it had just flown off. One guy thought he had it, on the far side of the lagoon, but all I could see was a Ruff. I walked round to the hide for a second time and still there were only Ruff, including a small reeve, which was probably the bird that guy had been looking at, but no Pec.
I walked back feeling frustrated, even after what was a decent day. Another guy informed me, confidently that he was watching the bird, but it was a Dunlin. Somehow I had walked around the reserve twice and managed to miss the Pectoral Sandpiper. It's still there at the time of writing.