First weekend of Lockdown #2 - The patch strikes back! 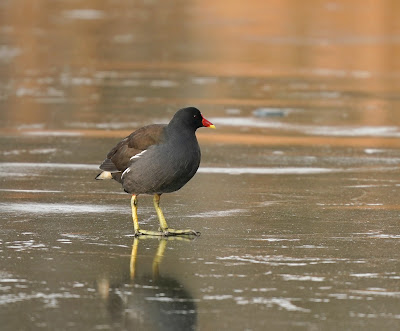 The government restrictions meant that travelling to go birding was not allowed, so I was back on the patch.

It was a cold weekend and Saturday was particularly icy, as I negotiated the paths around Nottingham Business Park, which were decidedly tricky under foot. I past a row of alders, and I thought they looked good for Siskin, although with the sun barely up, any self-respecting Siskin was probably still tucked up in bed.

Turning up the path that runs along the fields between there and Nuthall, I spied movement and almost stumbled into a Jay, which was foraging among the leaf litter of a large oak. I froze and tentatively raised my camera, turning the shutter down as far as I dare, although the Sony A9, seems to be noise free up to 3200 ISO. Under the circumstances, I think it turned out quite well. 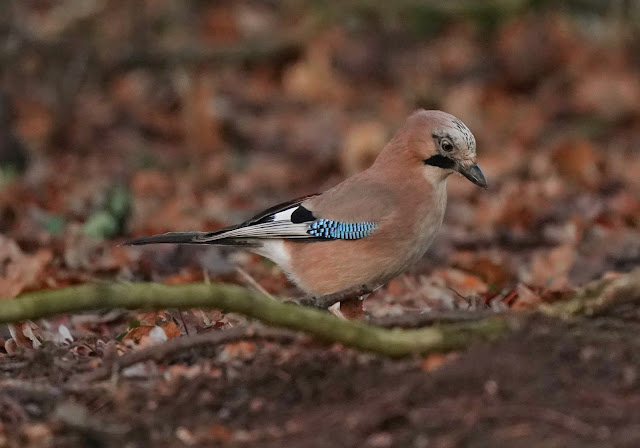 I spent a while with watching the Jay, which was very vocal, doing the buzzard-like mewing call and lots of whistles and tweets. A splendid bird.

The twinkling of goldfinch over head made me turn back, wondering if they were headed for the alders. I was greeted with a mixed flock dangling from the cones.  My approach initially caused the Siskins and Goldfinches to take flight, but I found a lamp post to hide behind. Emerging from my post, I gradually won the confidence of the birds. Bit by bit, I got closer and closer, until I was too close to focus at 600mm. 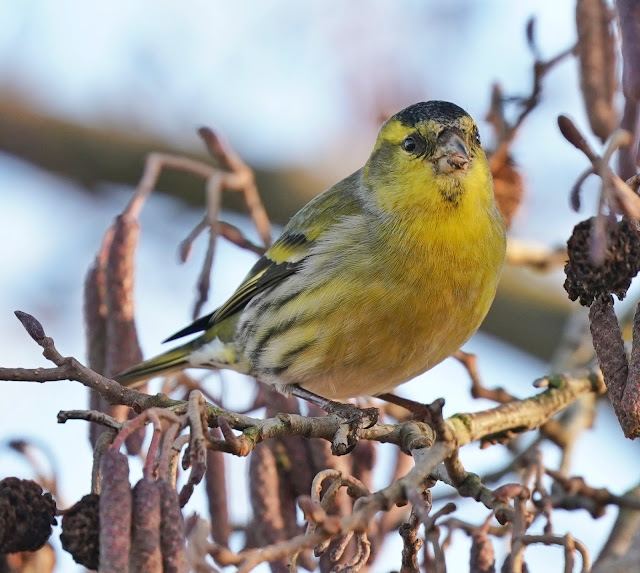 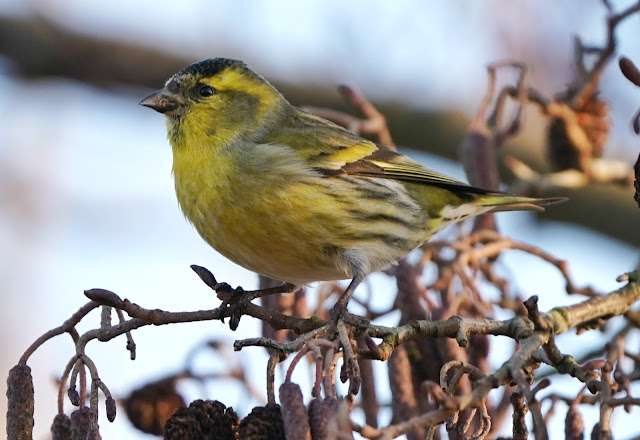 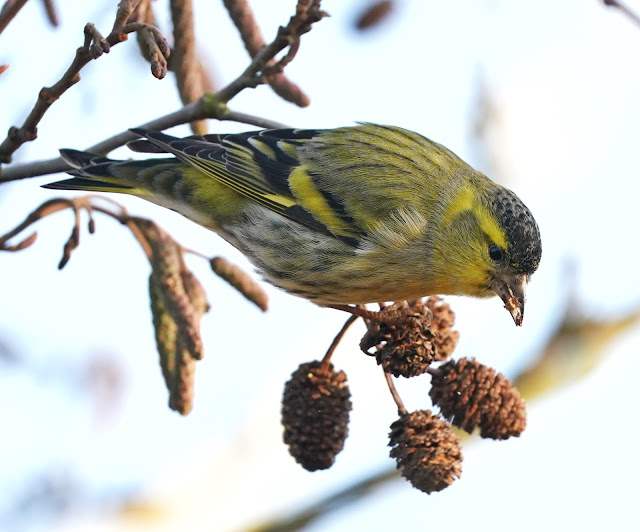 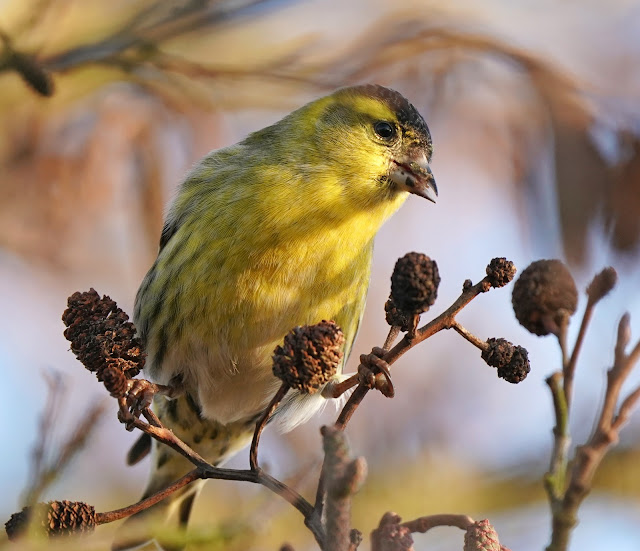 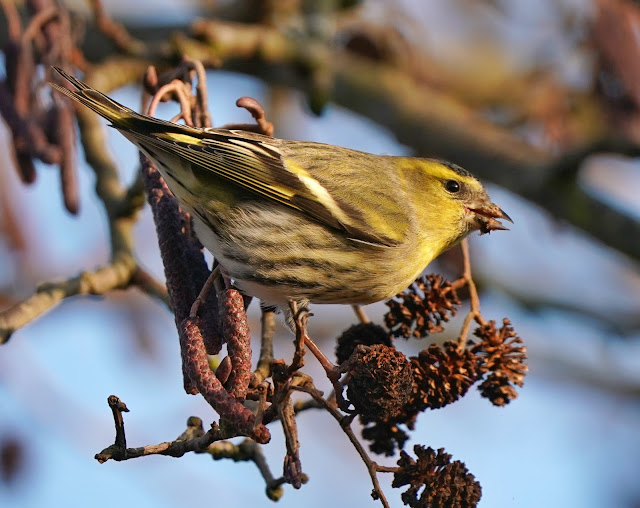 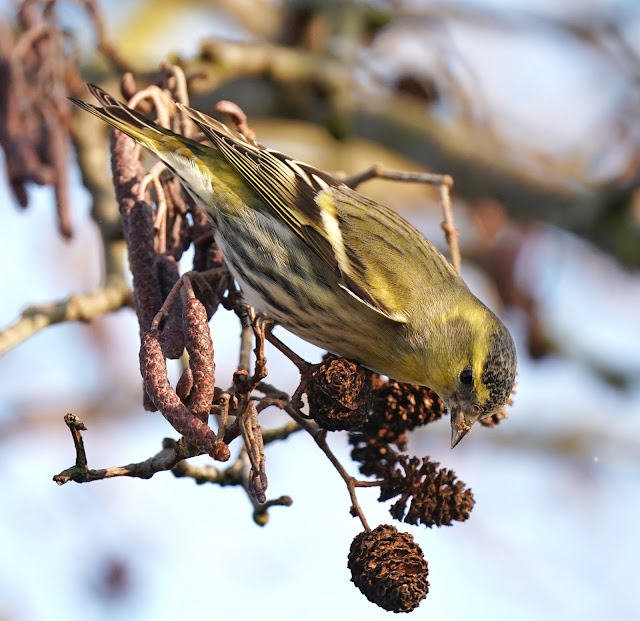 I called my friend, Mike Hill to share the info, who I knew was also patch-watching and whose patch over-lapped with my own. He reciprocated with news of a pair of Stonechats not too far away, which he had seen on New Years Day and might still be around. After logging a female Sparrowhawk zoom overhead, I made my way towards the spot that mike had mentioned, I located the Stonechats without too much difficulty. However, given the sparse habitat, I didn't linger, obtaining a couple of record shots and moved on. 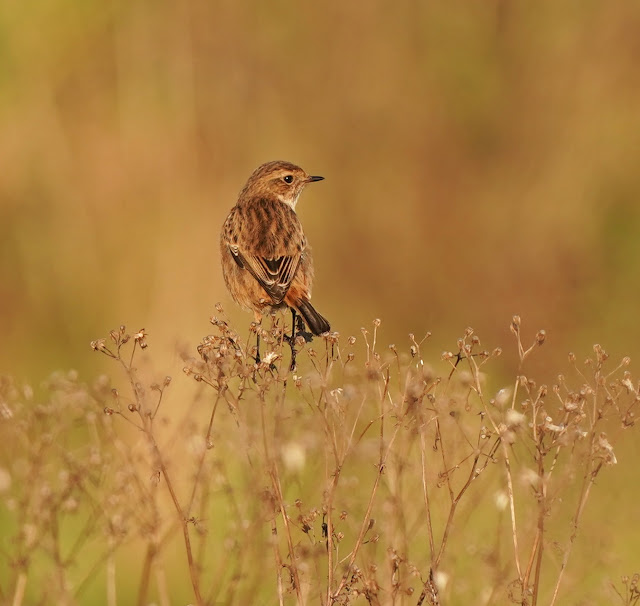 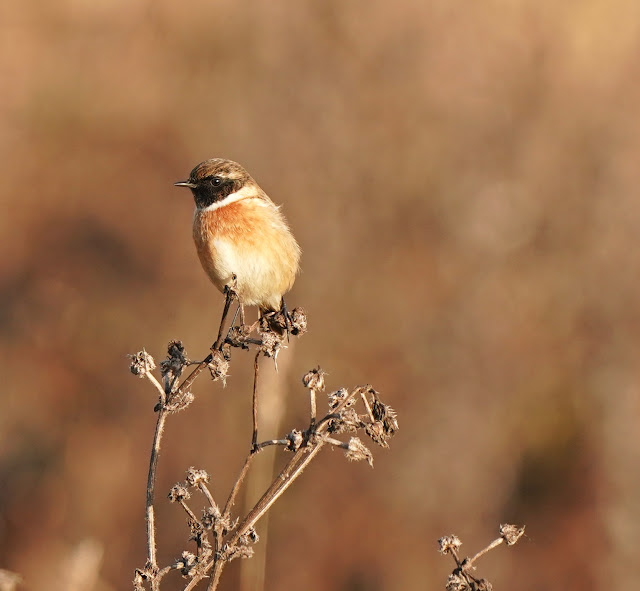 Stonechats
Sunday was another bright day. I breakfasted, put some bird food out and set off for Martin's Pond. En route, I mused about the possibility of Water Rail, a species which is annual at the reserve and would be a nice addition to the lockdown list.
I arrived at the site and within seconds saw a Water Rail walking around on the ice. I mobilized my camera, but it ran into the shallow reeds/tangled green-brown stuff. I walked to the first gap in the vegetation, only to see the bird dart across into the next batch of reeds. I realised that I had to act quickly and hurried to the end of the path. I figured that with a fair wind, the bird was going to appear in the open.  The one problem was that my only vantage point was entirely exposed.
I was ready with my camera, and remained still as the bird walked out, saw me and ran back into cover; but I managed to capture the moment. 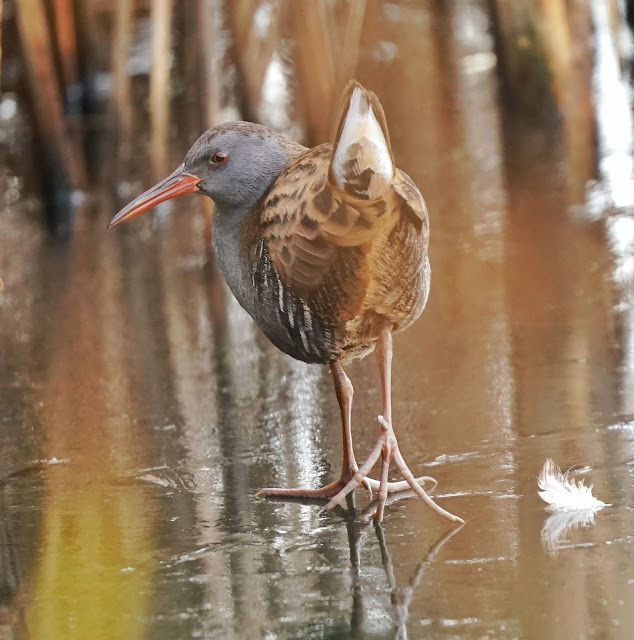 The pond was 80% frozen and 40 Black-headed Gulls and three Common were bathing and drinking from the water, which made for some nice photos. Around the reserve were the usual suspects, plus a single Little Egret, which is still scarce there. A gathering of 11 Eurasian Teal is my best count from the site. 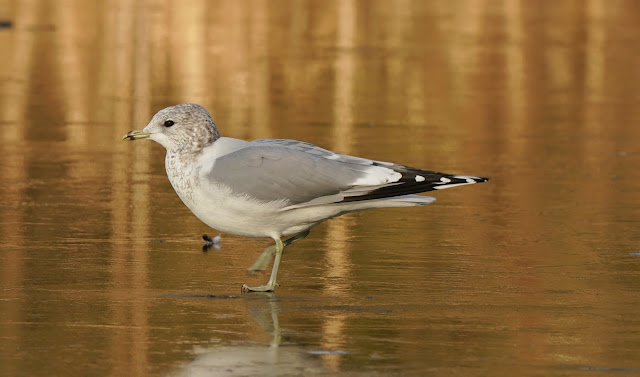 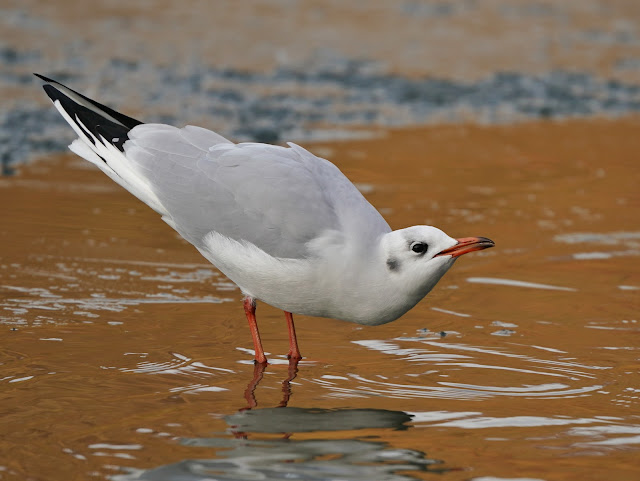 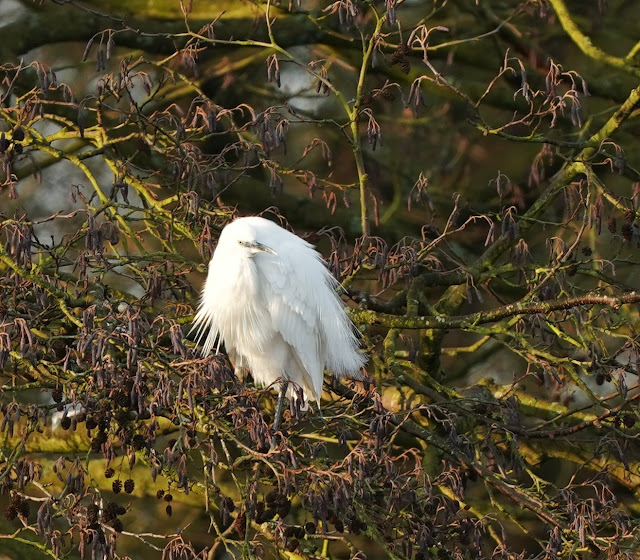 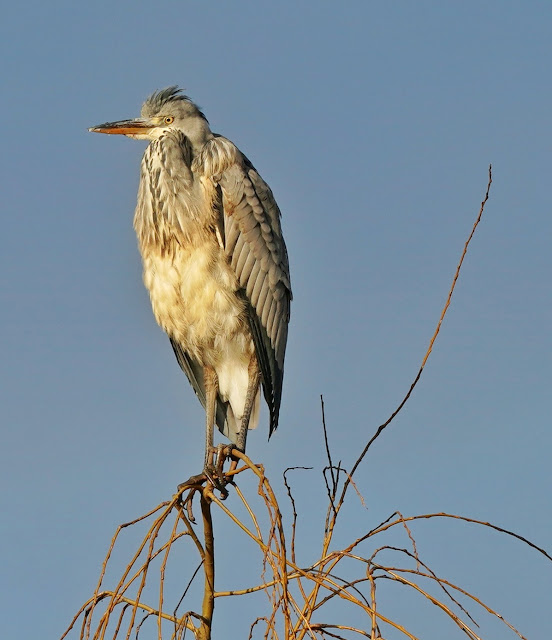 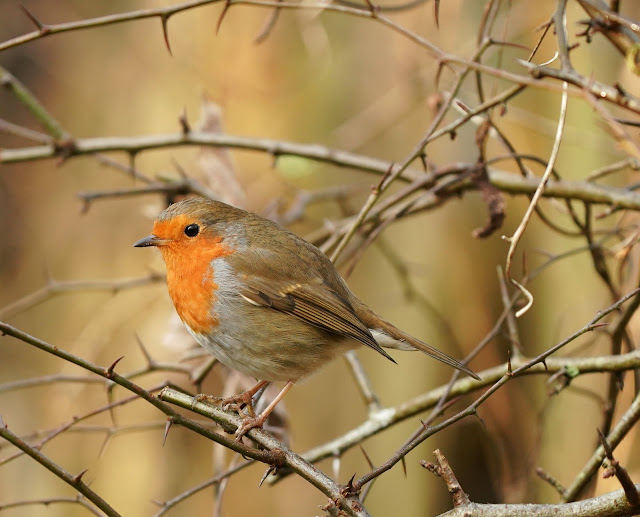 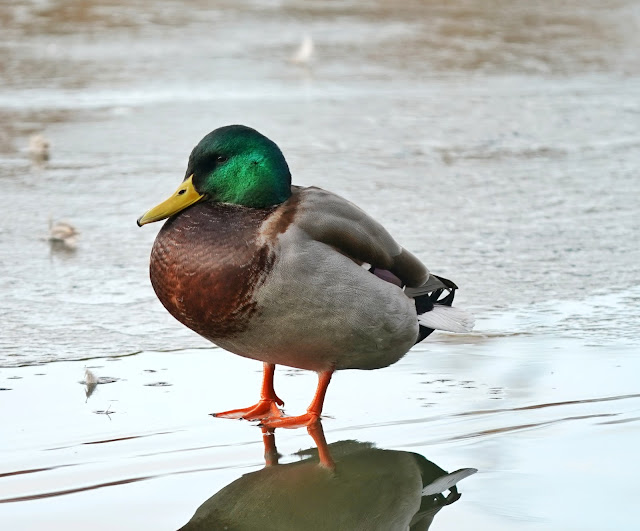 Eurasian Teal
Leaving Martin's Pond, on what was one of my best days there for a while, I moved on to Wollaton Park.
A gathering of around 200 Redwings, were feeding among the leaf litter, but getting a shot was severely hampered by the ever bird oblivious public, who scared the birds despite my attempts to stalk them. I did manage to divert a lady with a polite 'excuse me' but this was to nought as 'my birds' were flushed by deer-spotters.
With perseverance and by dodging from tree to tree, I managed to sneak up on a Redwing, as it grubbed around and made a nice picture among the autumn colours. 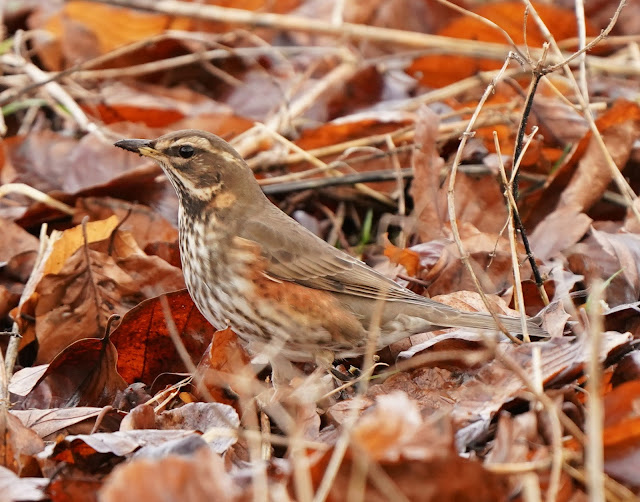 I continued with my walk around the park. Still no Tawny Owl, but bagged Rose-ringed Parakeet for the list and the mainly frozen lake was holding good numbers of gulls, including Lesser Black-backed Gull and unusually for there - Herring Gull.  Egyptian Geese were on good form. 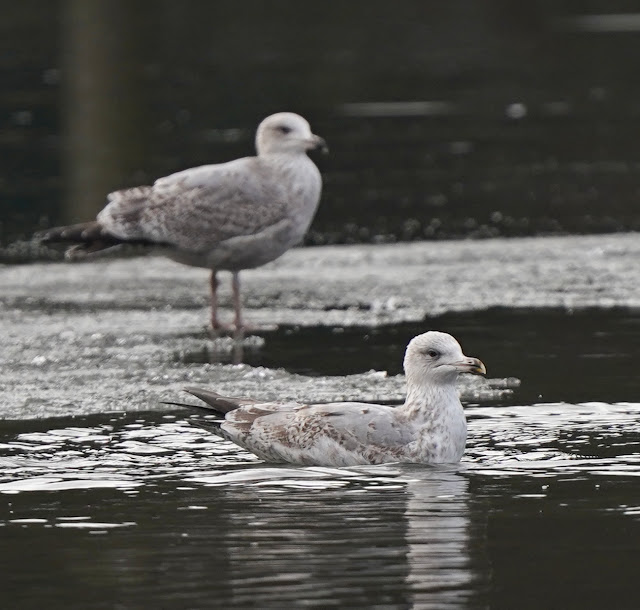 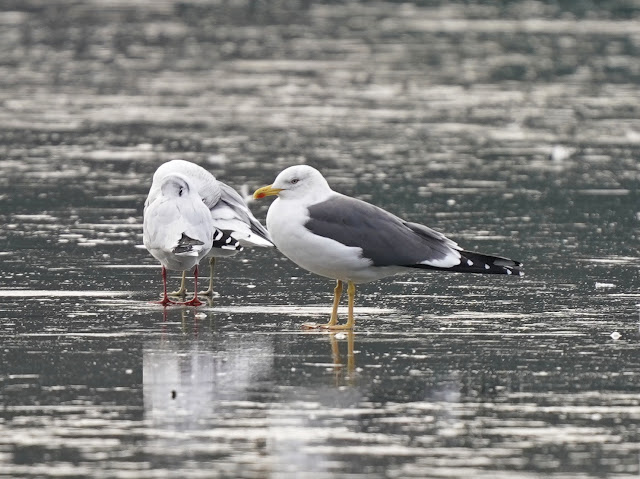 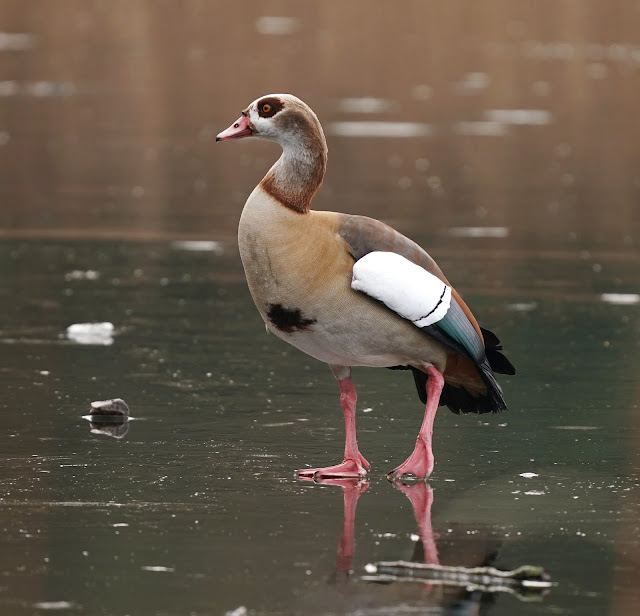 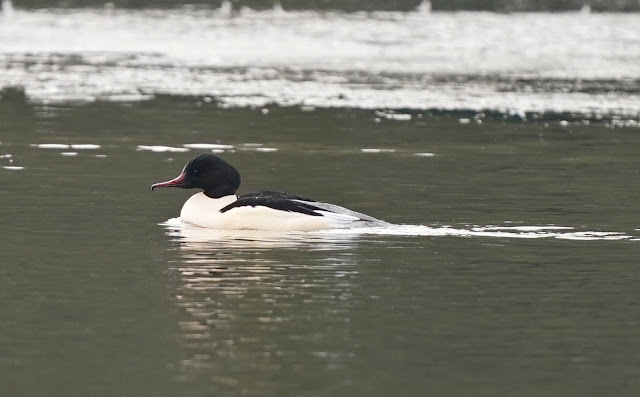 Working my way back through the park, I was attracted by four Nuthatches, chasing each other around the trees under which the Redwing had been feeding. But they were of before I could get a photo. However, as I was about to move on, a Treecreeper alighted right in front of me - a smart little bird and I got some nice photos, before returning home for a coffee and a Danish. 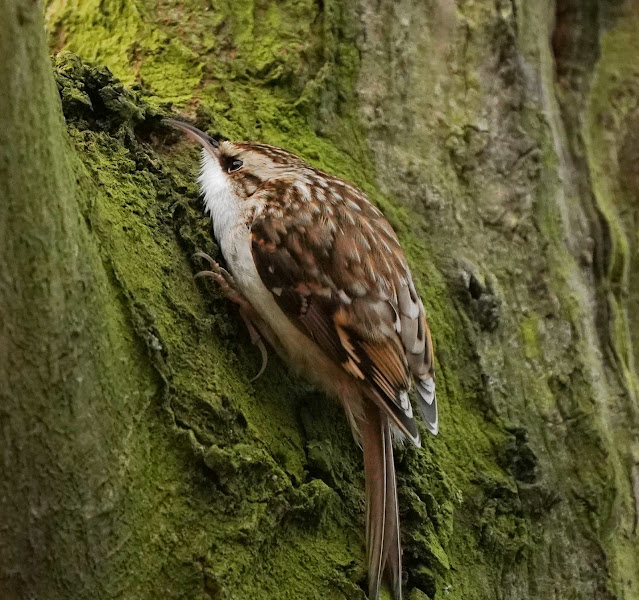 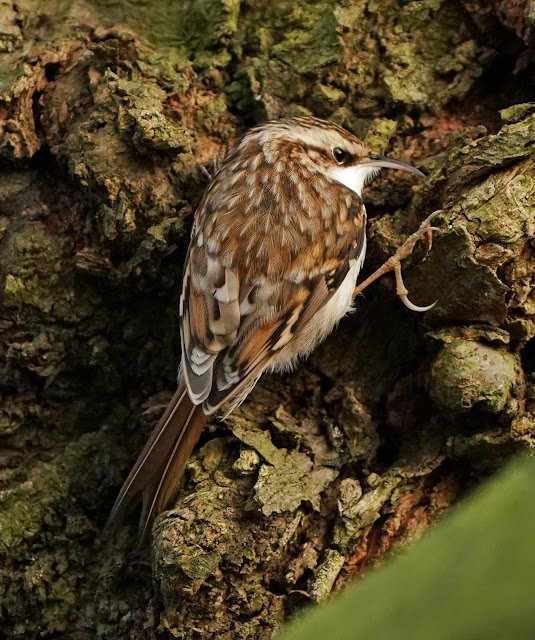 Treecreeper
Posted by Andy Hall at 02:00