It was time for my second trip to the island this year and a week earlier than usual, owing to work commitments.  This actually proved rather fortuitous.  A period of light easterly winds in the last week of September had been rather unproductive on the island although two recent arrivals, a juvenile Rose-coloured Starling and a Red-breasted Goose would both be Dutch ticks.

I arrived at lunch on the Friday and after a light lunch provided by my host I headed for de Tuintjes in pursuit of a blythi Lesser Whitethroat that had been found the previous day.

I located the bird after an hour.  I'm a bit cautious of identifying these birds in the field but it had been seen extremely well and photographed the previous day at close range.  I did note the rather warm brown mantle and indistinct mask.  The bird was rather unco-operative remaining in the out of bounds part of de Tuintjes for most of the time, so I only managed one rather poor record shot. 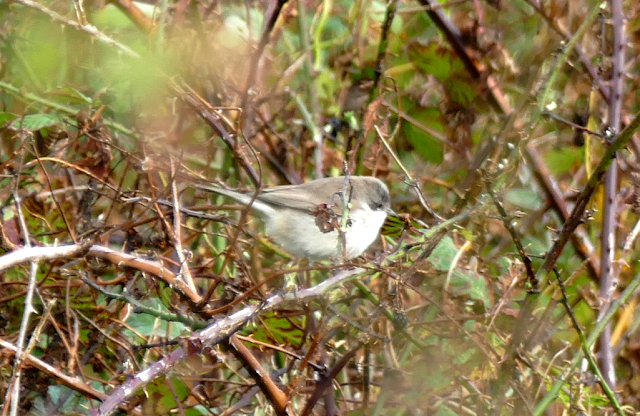 Rather more entertaining and exceptionally confiding was a Spotted Flycatcher, which showed down to 5 yards at times. 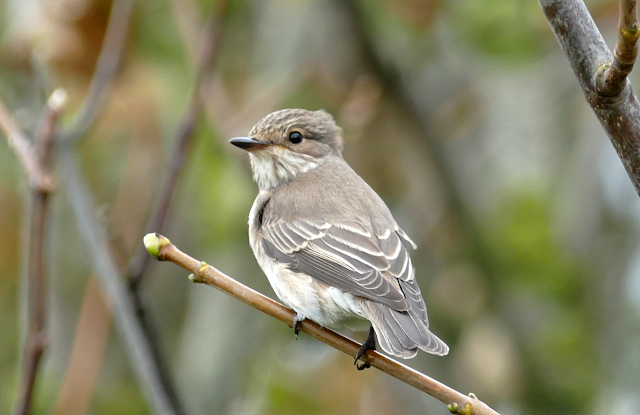 The Saturday saw the winds turn to the south.  The result was a fall of Blackcaps and Great Spotted Woodpeckers. The former were everywhere, with a minimum of 30 birds seen personally around the north of the island.  The latter were well into double figures, clinging to any bit of tree they could find.  A few were present the following day, but gone by the Monday.

Around lunch time, I was near the lighthouse when news broke that the Rose-coloured Starling had been relocated just north of the life boat station.  After a short walk I found the bird flycatching from a holt of willows in the company of a few Common Starlings.  I watched the bird for five minutes before it flew off.  Great views in the scope but alas it was never close enough for more than a very dodgy record shot. 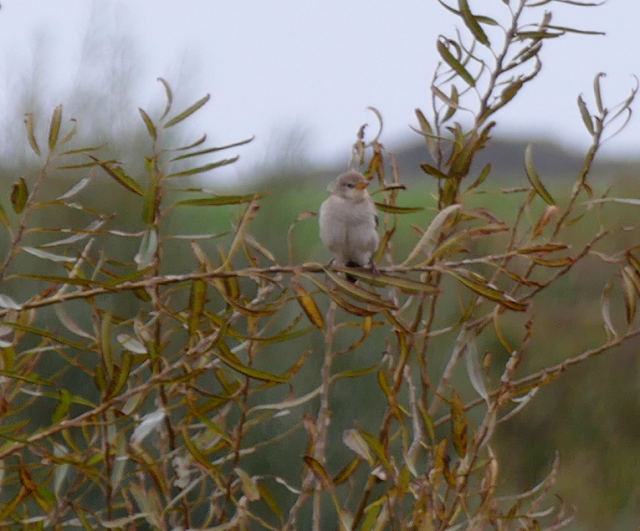 I headed back to de Cocksdorp for lunch and then walked around the sea wall to Zeeburg where the Red-breasted Goose had been showing for the past few days.  I located it after ten minutes, scoping  scores of Barnacle Geese and Greylag Geese.  It's surprising how subtle these birds are, given their relative colourful hue for a goose.  It was way too distant for a photo.

On the seaward side were a few commoner waders.  It had begun to rain and with steely grey skies the light was awful. I did manage a nice shot of a confiding Oystercatcher, though. 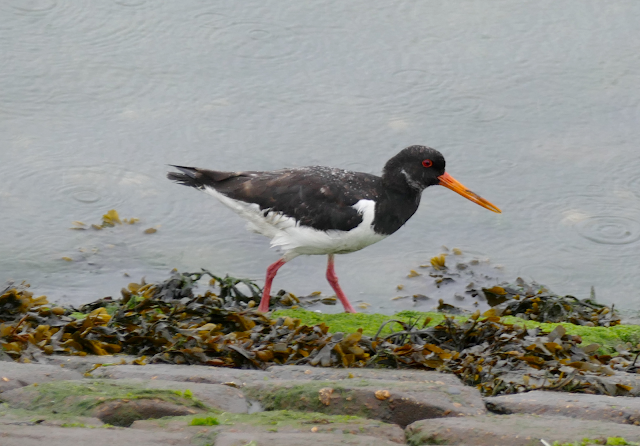 The weather perked up in the afternoon and I walked along the sea wall by the old harbour.  A couple of migrants, a rather weary looking Barn Swallow and a Northern Wheatear posed nicely for photos. 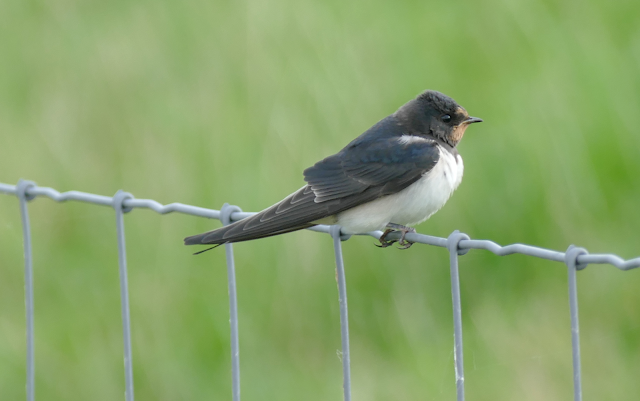 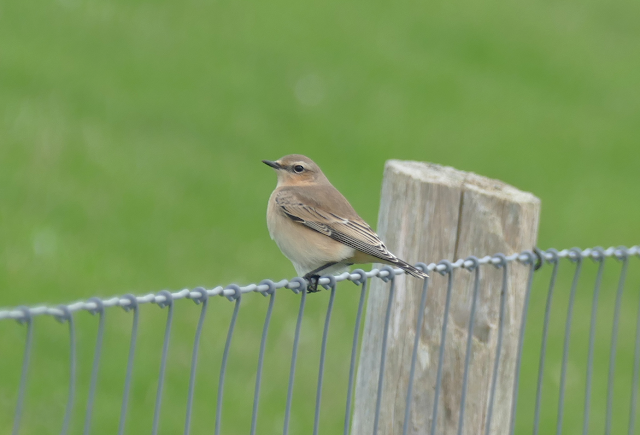 I finished off at the Eirlandse Dunes, where a ringtail Hen Harrier, a 1st cy bird showed very well, but once again, very poor light marred what might have been excellent photos. 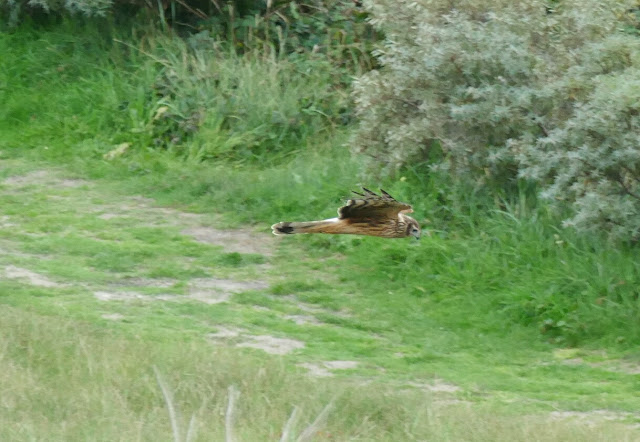 Sunday was a fine day with south westerly winds.  A party of four Coal Tits by the Lifeboat Station was nice and I heard that there had been something of an influx of the species in the south of the island.  I found little else of interest during the day until at 2pm I was walking around the south corner of Renvogelveld when a Richard's Pipit flew over south west giving its distinctive 'sreep sreep' call.  This was the second bird seen on the island that day.  In the late afternoon I visited the old harbour at low tide and found a remarkable selection of Dunlin and a few Knot including a bird with multiple colour rings.  I also got a nice record shot of a Pintail by the shoreline along the sea wall. 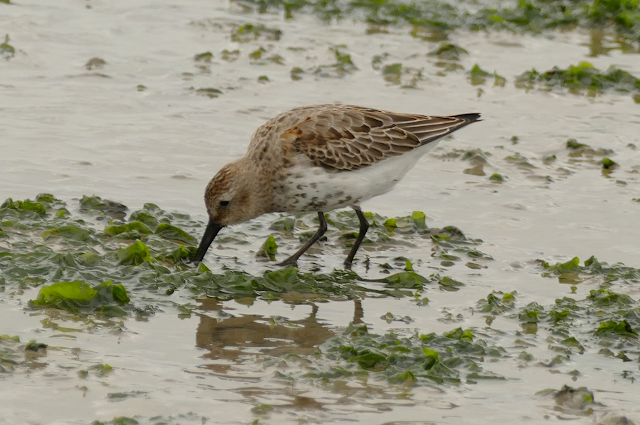 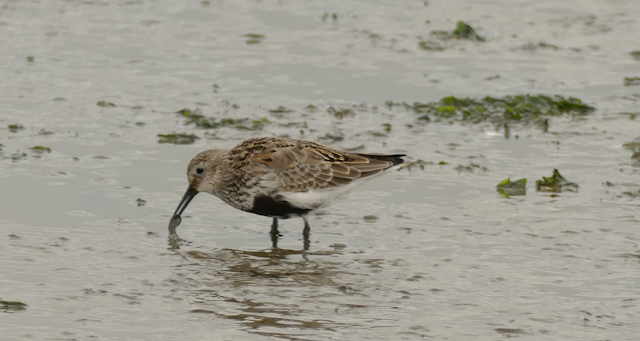 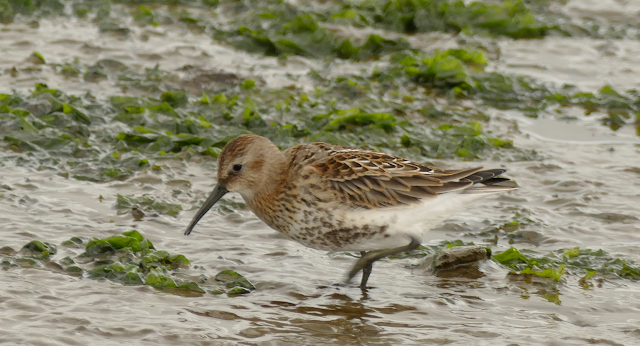 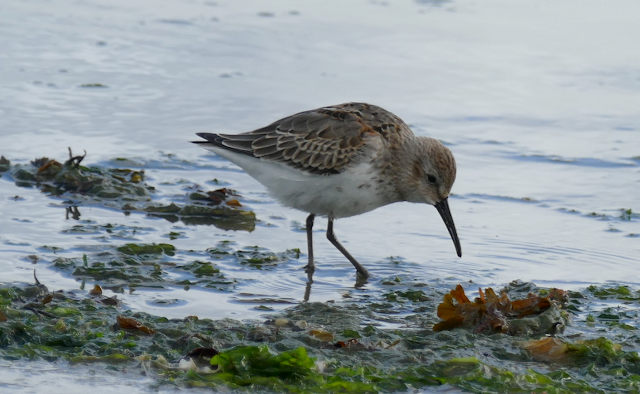 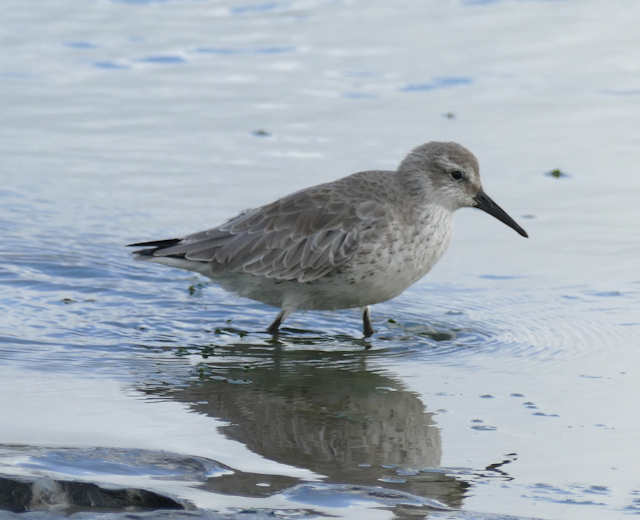 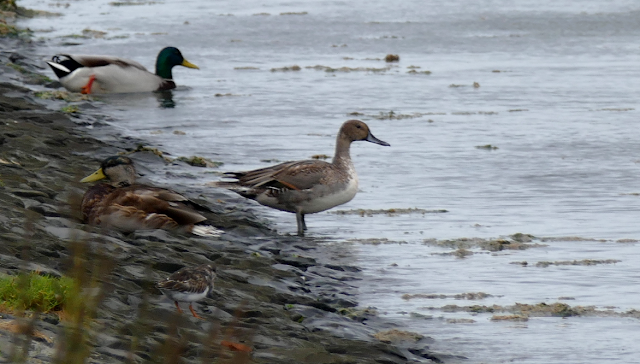 Monday was marked by a fresh south westerly breeze following a clear night and I headed down to the south of the island to check out the extensive network of bushes at the Horsmeertjes.  There seemed to be a lot of Song Thrush around and there had obviously been a bit of a fall with conservatively 50 birds in a 100 acres area.  I flushed a single scaly-looking first winter male Ring Ouzel that gave its distinctive 'chook-chook' call as it flew from under my feet.

Among a party of Long-tailed Tits I had a very close Chiffchaff, a species that seemed distinctly scarce in the week and it posed long enough for a nice photo. 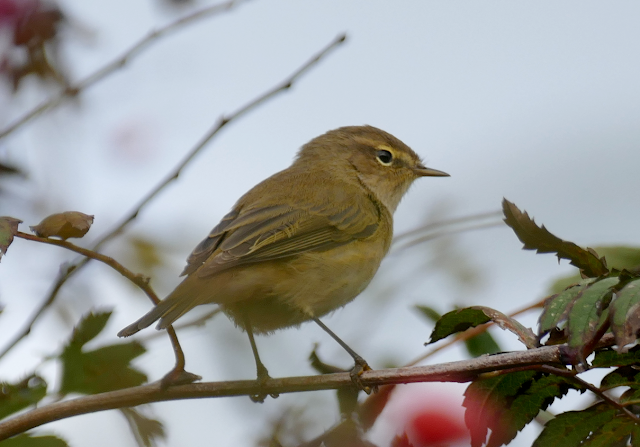 The remainder of Monday was hard work and I saw little else of note.  I did however find a nice cluster of Sulphur Tufts. I think the composition of the fungi and the moss was very attractive. 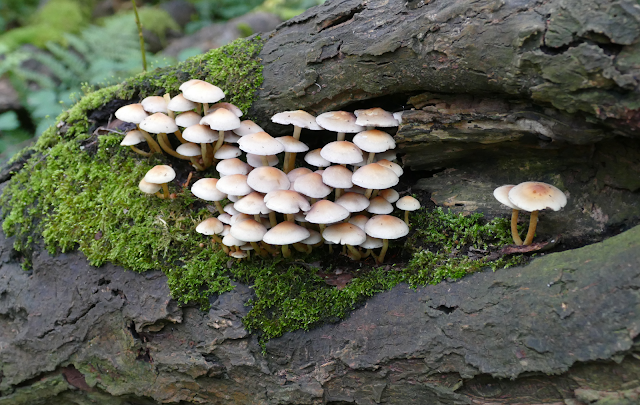 Tuesday was an early start and I joined Jos van den Berg and Jasmijn Hulleman for a sea watch. We were at Paal 15 near De Koog for first light and set up full of enthusiasm in the brisk north westerly wind.  Alas, apart from a steady stream of Gannets and Common Scoters moving north and a few Arctic Skuas, it was a bit flat.  We packed up after two hours.

I spent the rest of the morning and early afternoon seeing very little, until Jos contacted me saying he was going to give Paal 15 another go.  He picked me up at 4pm and we headed south.  The wind had eased a little, but I had a feeling it was going to be good.  Almost the first bird I got onto was a Puffin belting south and not too far out.  I had no idea that this was a good bird for the Netherlands, although I suppose it's obvious really.  Despite me giving directions, my companions never got onto the bird and we concluded that they had under estimated how far out it was.  It was a lot closer than nearly every other bird I saw on that sea watch.

It wasn't long before we were seeing a few Arctic Skua and Great Skuas moving south.  After about 20 minutes Jos was onto a distant Sooty Shearwater.  I got onto it, but it was pretty distant.  We had about nine Sootys in total all moving south in two hours, mostly half way to a long way out.  After about an hour we had two nice 1cy Pomarine Skuas going south quite close in, and in all a total of about 20 Arctic Skuas and 12 Bonxies.  'Sea birds' had been a group that I had several gaps in, on my Dutch list, so to get three ticks in one sitting was a nice boost.

Wednesday was another windy day with the winds from the west.  I decided to head to the east of the island and have a look at the coast.  There were hundreds of Dark-bellied Brent Geese and stacks of waders including a few new for the week list - European Golden Plover, Avocet as well as oodles of Curlews and Bar-tailed Godwit.

As I was contemplating what to do in the afternoon, news reached me of a Red-necked Phalarope at De Staart.  This was tricky to get to without my own transport, so I contacted my host, Ger who was out shopping.   He kindly made a detour to pick me up from Prins Hendrick and drove across the island to the flooded field and its black windmill at De Staart.  I was onto the bird immediately, at the back of the pool.  A dainty, pastel-coloured bird and pirouetting as they do. Also here were two Ruff, along with stacks of Eurasian Wigeon and Gadwall.

Thursday was a brighter day with strong (force 8) westerly winds with sunshine and showers.  After breakfast, I joined Jos by the Coastguard's hut for another sea watch.  There was a plethora of gulls and waders moving off shore.  However bird of the morning was an adult Long-tailed Skua that moved east not too far out.  This was a significant bird, as it was my sixth Dutch lifer of the trip and my 250th species overall!

Jos had to dash, but I continued to scope the troughs and Neptune's white horses and eventually had several Arctic Skuas, a Bonxie really close in and a single juv Pom.  All four skuas in two hours!  Can't be bad.

When things on the sea had calmed down, and with the wind abating, I set about photographing the assortment of species that had gathered on the beach at Volharding.  It was a very pleasant couple of hours, including lots of Sanderlings, a few Ringed Plovers, six Common Terns, an adult Yellow-legged Gull (which was a soft gap in my list), and several Bar-tailed Godwits, including a very sharp summer-plumaged bird and few other bits. 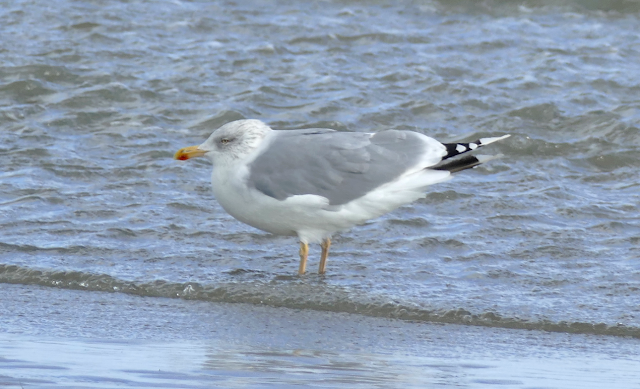 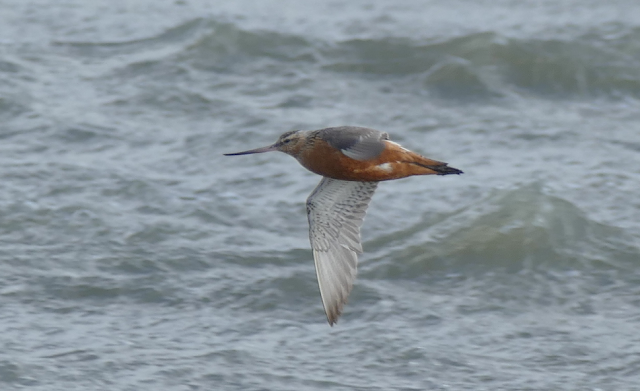 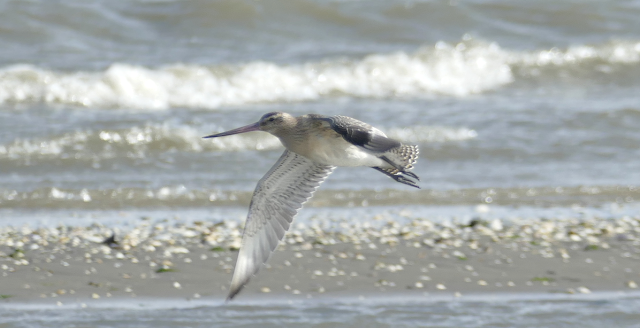 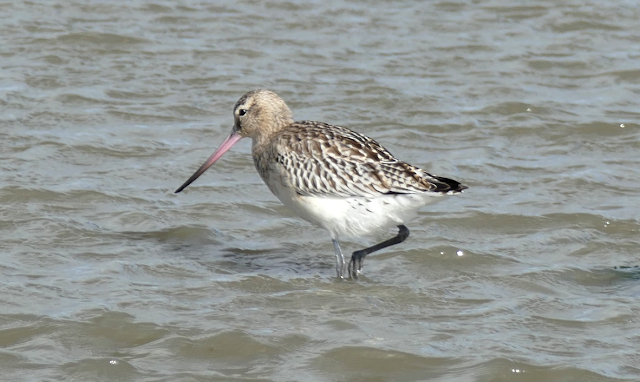 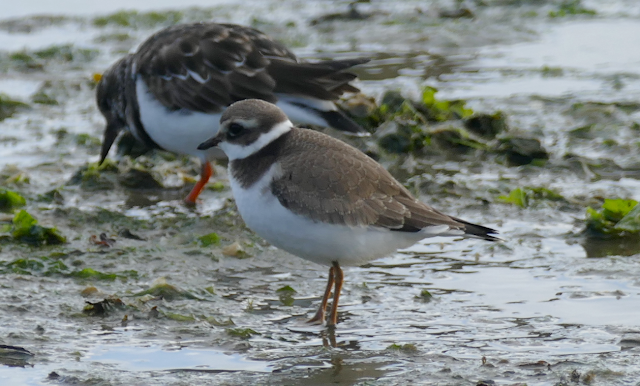 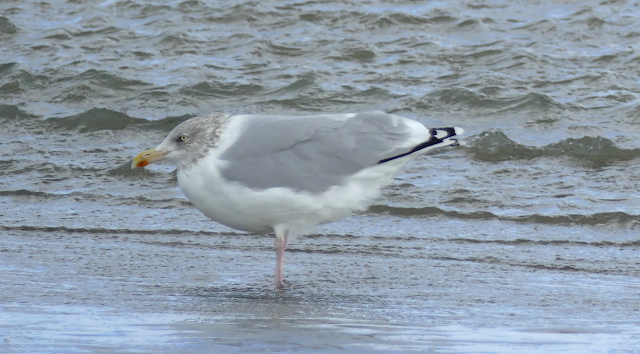 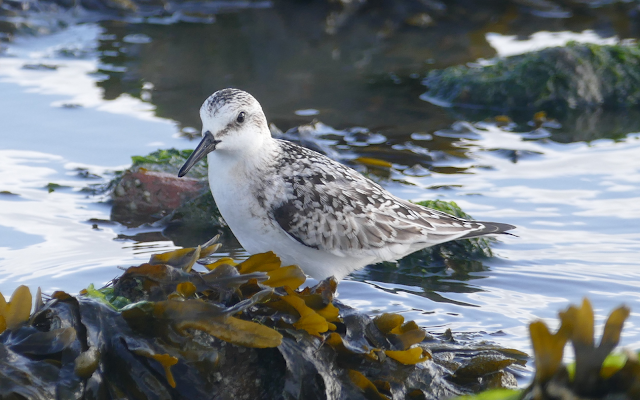 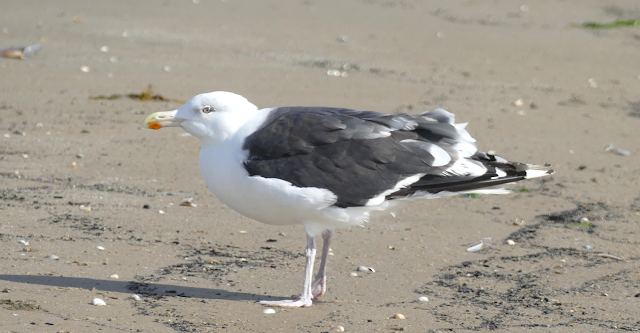 Friday was my last day on the island.  It was squally with another good blow, now coming from the North north west.  I headed for the Coastguard's hut again.  A handful of birders had assembled and had already bagged a Grey Phalarope and several Skuas.  I set up my scope and we soon had a Gannet almost over the beach, as well as several Arctic Skuas fairly close in.  After about 45 minutes someone should 'Vaal!'  Short for 'Vaal Stormvogeltje - Leache's Storm Petrel.  The bird was close in and battling against the wind just above the surf.  I had fantastic scope views and even managed a record shot.  In the next hour, there were more skuas, including a nice juv Long-tailed Skua.  A great morning! 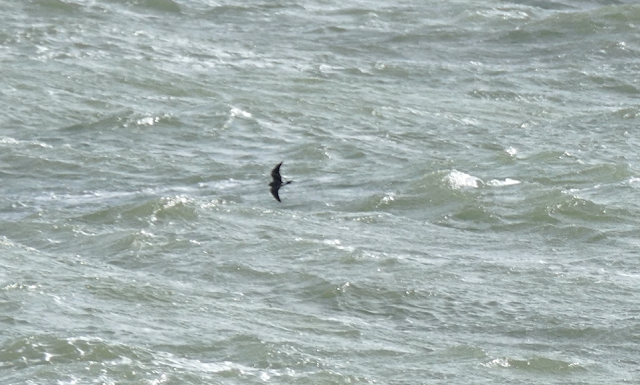 Around 1pm, I packed up and headed to the ferry.  I'm now planning a long weekend in May 2018 to knock off some of the gaps in my Dutch list.