This is my first Blog post for a while, as I've been bogged down with the 2014 and 2015 Annual reports among other things.  I thought it was about time I had a full day out.

Knowing that this is the time to get to grips with Cetti's Warblers, I headed down to Attenborough Nature Reserve with the trust Panasonic FZ1000.  The Met Office had talked of sunshine and showers, which sounded bearable.  Why do we listen to them?  The Met Office must employ Derren Brown, because no matter how often they get it wrong (which is kind of always) we still get seduced by their meretricious predictions!

Anyway, for sunshine and showers read 'steady drizzle' but being all hardcore and that, I was undeterred and got down to Attenborough for 9AM.  First good bird was a nice drake Pintail on Tween Pond.  The light was awful and it wasn't too close, so I almost considered not posting this photo.  At least you can see what it is... 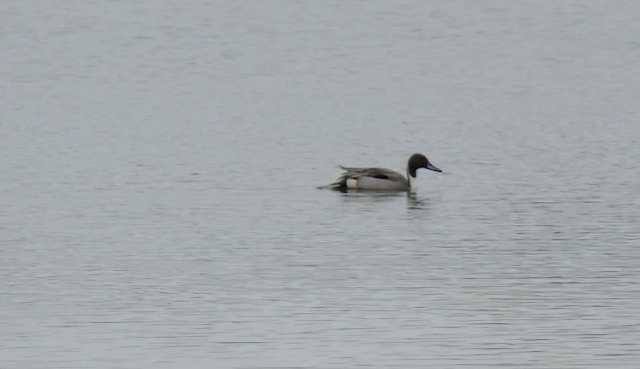 As Cetti's Warblers were singing all over, along with the odd Blackcap and Chiffchaff, I set about trying to find a Cetti's that was actually visible.  I headed for the tower hide, which has had its staircase mended and is a bit safer underfoot now.  It had stopped drizzling and the clouds were lighter producing quite a nice flat light.  I plonked myself down and was presently joined by David Parkin and Fred (don't know his last name.)

As I was birding/chatting to my companions, a Cetti's Warbler began to sing directly under the hide.  I opened the side flap carefully and managed a fairly close shot of the bird.  It was just the front half, as it was partially obscured by foliage, but I think it's quite good.  As the bird moved a little way along the hedge I got another shot of the whole bird, looking down on it.  A little further away, but both photos are way better than anything I've had before. 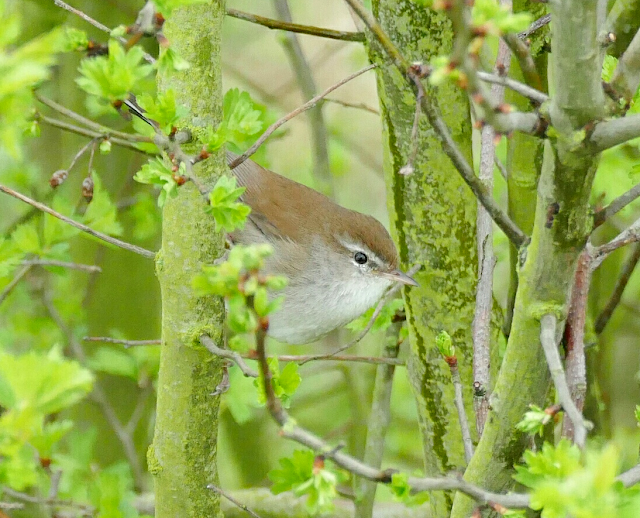 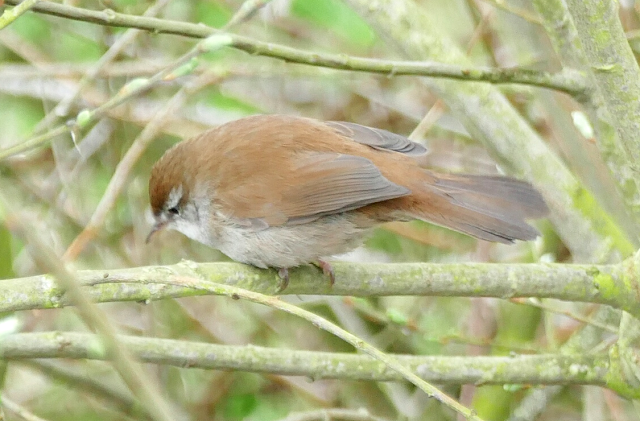 Making my way back to the centre, I paused at the Kingfisher hide.  I miss the bird table here.  They took it down because of the rats, allegedly.  I don't have a problem with rats, and you could get better views of the Tree Sparrows there but hey ho!  Anyway, a pair of Goldeneye were swimming and diving a little way out, but being Goldeneye never came too close, so I just got a record shot. 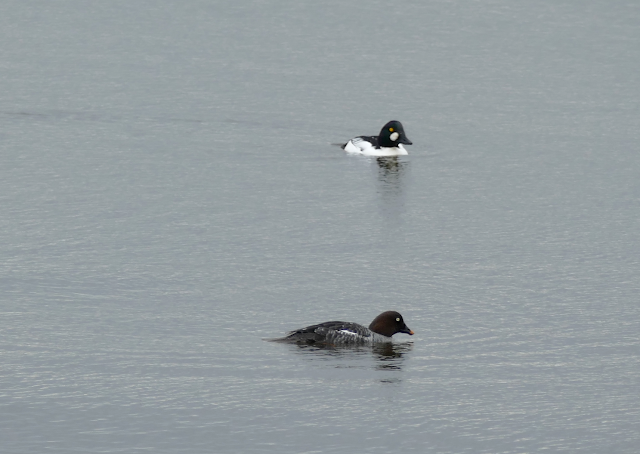 Having been in the field three hours and getting over tonsillitis, I decided it was time for coffee and cake.  The peanut stack is my favourite, and couldn't resist some squirty cream on the side. 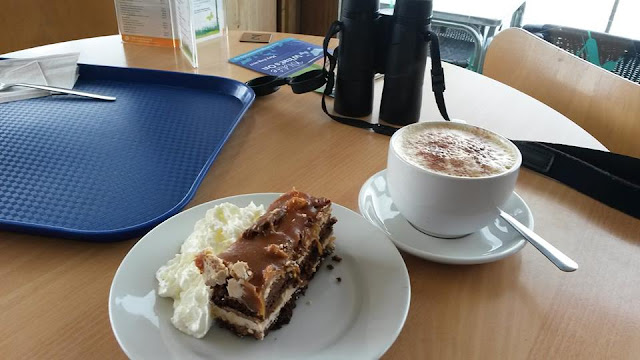 I spent the next half hour searching fruitlessly for the Waxwings that Simon Roberts had had in the Village car park earlier.  Fruitless is actually quite a good choice of words, as the birds had stripped the berries from all the trees.

I headed back to the reserve with the intention of having another go at Cetti's.  I was interrupted by a particularly obliging Wren, which sung its heart out on Barton Lane. 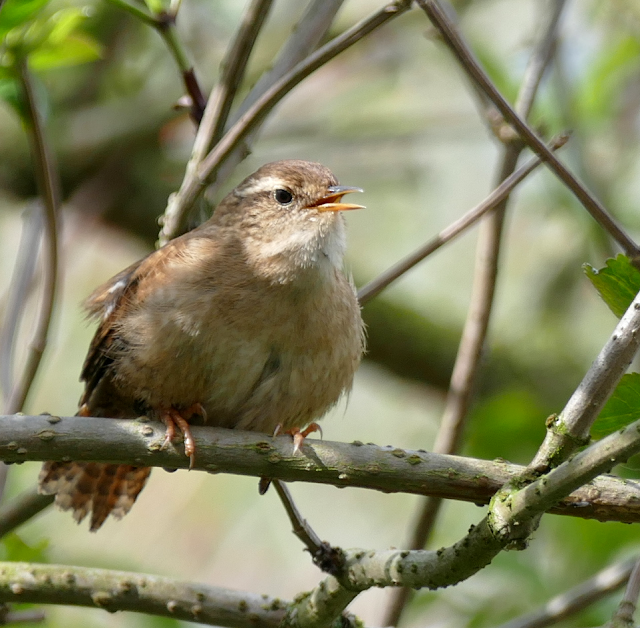 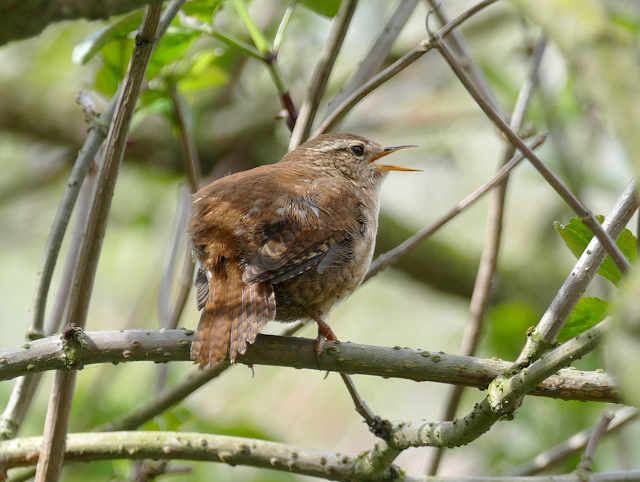 My quest for more Cetti's almost paid off, but I had to make do with a naked eye view at the end of Barton Lane, which was so close, I would have struggled to focus, but it flew off anyway.

Back at the tower hide, I finished with a nice close-up of a Great Tit collecting nesting material. 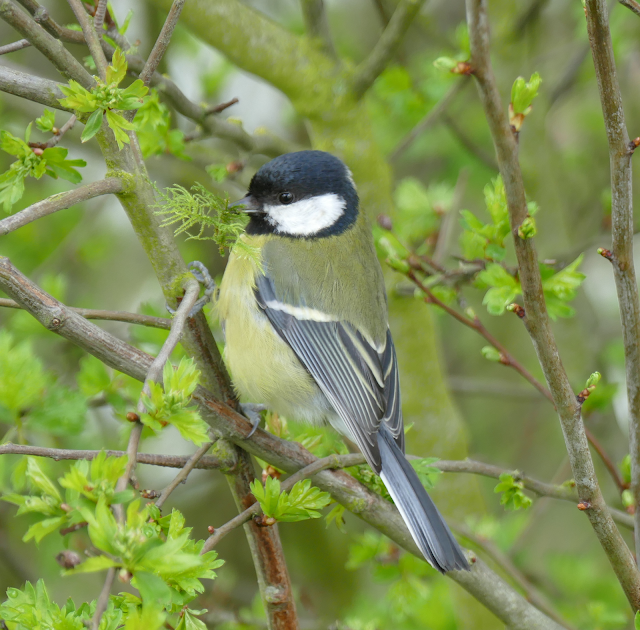 Still feeling slightly groggy from my virus, I packed it in at 3.30 and got the train home.  With spring properly here, I'll be back down to Attenborough soon.